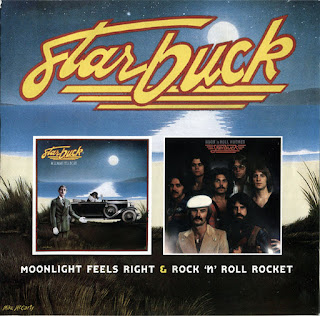 Starbuck is one of the rare '70s pop oddities that lives up to its one-hit wonder, delivering music every bit as beguiling and strange as that hit. For Starbuck, that one hit was 1976's glistening synth-and-marimba sensation "Moonlight Feels Right," a slick slice of soft rock that captures the mid-'70s in all its feathered, polyester glory, but the remarkable thing is that their full-length debut -- naturally also titled Moonlight Feels Right -- follows through on its smooth promise, offering another nine gauchely bewitching soft pop tunes.
A certain amount of cheese comes with this territory, and Starbuck has some of the silliest in memory: a swinging ode to "Lash LaRue," a stiff bit of white-boy funk on "Working My Heart to the Bone" (just like you're "picking on a chicken"), the chant-along chorus of "I'm Crazy." But even at their silliest, they're still tuneful, fusing attractive elements of Steely Dan and 10cc while leaving behind guitars, and when the goofiness is toned down, the group offers some pure pop pleasure, particularly in the opening "I Got to Know," "Lucky Man," and "Moonlight Feels Right," which remains strangely timeless even as it is inextricably tied to its time. And that's appropriate -- Starbuck is a thoroughly modern band circa 1976, which also means that their appeal lies in both their melody and cheese, and Moonlight Feels Right excels in both.
Rock 'N' Roll Rocket, Starbuck's sequel to their 1976 hit Moonlight Feels Right, is firmly within the tradition of their debut: it's smooth, tuneful soft rock, built on synths with guitars swapped out for marimbas. It's the same style, but the emphasis has shifted slightly, with the group pushing discofied rhythms over louche melodies, which makes the album a little less memorable, even if it retains a considerable amount of period charm with its laser-blaster synthesizers and percolating rhythms, and it's hard not to find a bit of camp charm in the subdued swagger of "Don't You Know How to Love a Lady," the disco fantasia of "Everybody Be Dancin'," and the perhaps tongue-in-cheek SoCal breeze of "Benny Bought the Big One." Cherry Red's two-fer of Moonlight Feels Right/Rock 'N' Roll Rocket contains two bonus tracks: "One of These Mornings" and "Gimme a Break."
by Stephen Thomas Erlewine 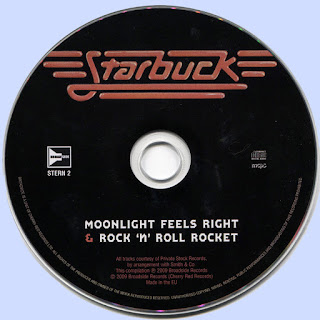