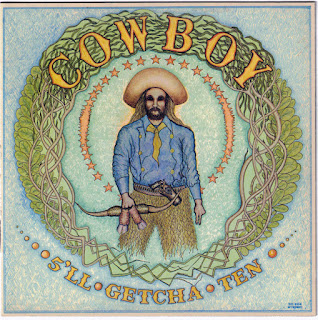 One of Southern rock's best-kept secrets during its golden age in the 1970s, Cowboy were formed by songwriters Tommy Talton and Scott Boyer in Jacksonville, Florida in 1969. Playing a kind of acoustic country-rock similar to contemporaries Pure Prairie League, Cowboy had their own twist on the formula, thanks to Talton and Boyer's sharp, focused songwriting and a distinguishable Muscle Shoals flair.

After hearing the band, Duane Allman passed the word along to Phil Walden at Macon, Georgia's Capricorn Records, who offered the group a recording contract. The band's membership was pretty fluid during this time, other than Talton and Boyer, both of whom became de facto members of the Capricorn house band, playing with the Allman Brothers, Gregg Allman, Alex Taylor, and Bonnie Bramlett, among others. In all, four albums were released under the Cowboy name on Capricorn Records, 1970's Reach for the Sky and 1971's 5'll Getcha Ten.

Talton and Boyer put Cowboy back together in 2007, recording tracks at Sandlin's Duck Tape Studio in Decatur, Alabama, although none of those tracks were released at the time. After battling peripheral artery disease, Scott Boyer died in Muscle Shoals in February 2018; he was 70 years old.
by Steve Leggett

Full of laid-back Southern charm, 5'll Getcha Ten finds Cowboy further exploring the wonders of back-porch music. Strong songwriting and beautiful harmonies abound here, and cuts like the title track, "All My Friends," "Innocence Song," and "Please Be with Me" -- the latter of which features Duane Allman on Dobro and caught the ear of Eric Clapton, who included his own rendition of the tune on 461 Ocean Boulevard -- all sport fine musicianship. A great album to kick back and relax to.
by James Chrispell 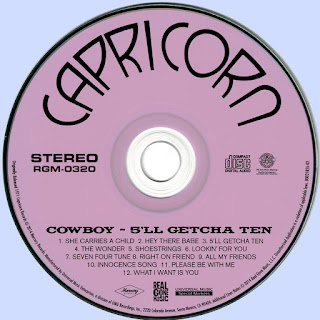 Free Text
the Free Text
Posted by Marios at 5:28 PM No comments: