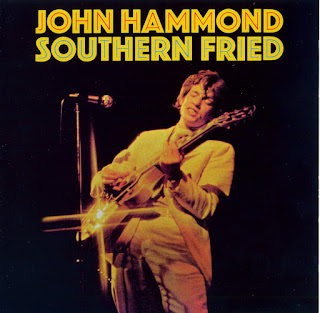 "Southern Fried" album teams Hammond with the famous Muscle Shoals Rhythm Section, and four tracks with guest guitarist Duane Allman. Hammond later recalled that the studio band didn't seem to rate him highly, until Allman arrived, professed himself a fan, and asked to sit in.
by Robin Lynam

John Hammond recalls:
I had been sent by Atlantic Records to Memphis to record with Tommy Cogbill producing. I got down there and whatever it was, I didn’t seem to connect with him on what I perceived his direction to be. I called Jerry Wexler and said that I didn’t think it would work out. So, he sent me down to Muscle Shoals Sound. These guys backed Aretha Franklin, Wilson Pickett and all these guys.

I arrived and assumed they would all be black studio musicians. They were all white guys. They were all a clique and everyone knew each other and their wives and it was a homegrown kind of thing. I liked Marlin Greene and he was a very easygoing and likable guy, and then Jimmy Johnson who is just a terrific guy. They all seemed sympathetic to me. I had these tunes that I wanted to do, and some were Howlin’ Wolf tunes and stuff, with Barry Beckett, Roger Hawkins and David Hood and all these phenomenal players. I mostly connected with Eddie Hinton. He was a cool guy, great guitar player and songwriter, and a great singer in his own right. I had been there for about three days and we had cut some tunes and I was feeling very frustrated and couldn’t get across some of the ideas that I had in mind. Then this guy Duane Allman and his friend Berry Oakley showed up and they had driven from Macon in this old milk truck. They walked in the door and everybody was like, ”Hey, Duane, how are you doing?”

Eddie Hinton said he was the guy that played the slide guitar on “The Weight,” but it was still not clear in my mind. Then Duane said he wanted to meet John Hammond. We decided to do a tune together and we did “Shake for Me” and my jaw just slacked. This guy was just phenomenal. So, all of a sudden all of these guys that I could not communicate with before understood exactly what I meant and that was the beginning of a short lived, but intense relationship. This was before The Allman Brothers Band was happening. Duane was just phenomenal and a really cool guy; and everything just came together and we made the whole record in one week. I didn’t get to know all the guys that well, but Duane, Berry and Eddie Hinton were the ones that I knew. Eddie was my connection to Muscle Shoals. 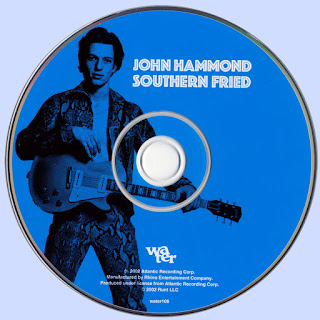 Free Text
Text Bin
Posted by Marios at 9:01 AM 2 comments: