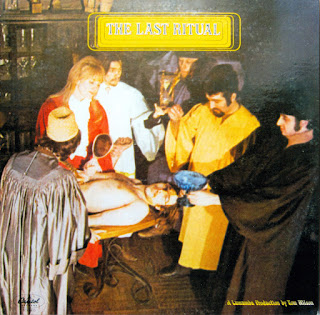 New York based, Last Ritual's lone LP from 1969 is definitely a step above that dubious wheelhouse, and if it was in better condition, I'd probably hang on to it and spend more time trying to decipher its weirdness. Many of the elements are there: good, occasionally heavy guitar work, a mix of long and short cuts, crazed, rambling lyrics, production work from Tom Wilson, etc. There's also lots of horns -- never fear, it's not horn rock, and the arrangements are very well done -- and maybe too much rambling.
The Last Ritual is more proto-prog rock than psych and features shifting tempos and styles from country to chamber music, heard best/worst and most seemingly random on the near-17 minute album closer, "Bugler's Reveille." Conducted, composed and arranged by one Allan Springfield, there's nearly nothing about this album or band online; in fact, many listings on discographies or the occasional copy for sale seem to think there's no band name for some reason. the album was recorded mostly live rather than tracked in pieces -- which would be truly impressive considering the complexity of much of this material. A few clues here and there also turn up info about a direct follow up band named Chelsea Beige.
by Bob Koch, July 10, 2011