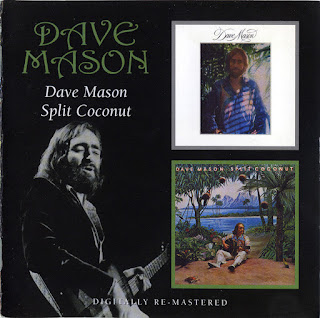 Using his touring band, which included keyboard player Mike Finnigan and guitarist Jim Krueger, Dave Mason turned in a strong pop/rock collection on his second, self-titled Columbia album. "Show Me Some Affection" was one of those songs that should have been a hit single, Mason recut a fuller version of "Every Woman," originally heard on It's Like You Never Left, and the album also included Mason's version of Bob Dylan's "All Along the Watchtower," in an arrangement patterned after the one by Jimi Hendrix, on which Mason had played six years earlier.
by William Ruhlmann

Split Coconut is Mason's first successful attempt to diversify that style; the result is a mixed bag of fine, listenable rock.While Mason's singing hasn't changed much over the years, remaining pleasantly untrained and unaffected, he demonstrates here that his is continuing to experiment and grow as a guitarist.

While a couple of the songs display the fluid, comfortable style he's mastered over the years ("Sweet Music," "You Can Lose It"), others are more innovative. "Split Coconut" is an irrepressible disco stomp and "Save Your Love" has a funky Lee Michaels flavor with some effective use of the wah-wah pedal. Other novelties include "Crying, Waiting, Hoping," which omits the guitars altogether and substitutes marimbas, a guest appearance by Manhattan Transfer and the use of organ on a light calypso number, and "Two Guitar Lovers," in which Mason and second guitarist Jim Krueger swap effective leads.

Split Coconut also boasts David Crosby and Graham Nash on backing vocals, but unfortunately they're so lost in the mix as to be almost inaudible. Still, this is for the most part a very entertaining LP.
by Alan Niester, Rolling Stone, 12/4/75 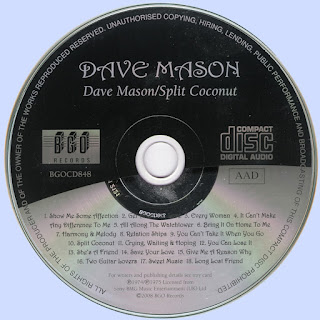 Free Text
the Free Text
Posted by Marios at 5:35 PM No comments: