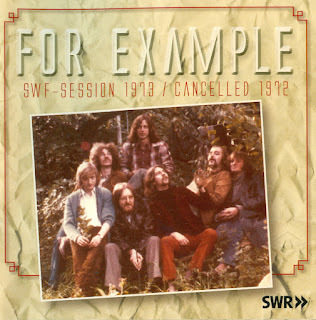 For Example is an another band from the SWF-broadcast vaults, with their recording they did in 1973. The band, founded in the late sixties, consisted of students of various study fields. In the beginning they played, under the name Frida III, cover versions of sixties hits, but after they had been taken on for 2 productions by the State Theatre Tübingen, they changed their music style, added three wind players with jazz experience and formed For Example. At first they played pieces of their favourite bands Chicago and Blood, Sweat and Tears, but their repertoire also comprised soul numbers with horn sections.
Step by step they added self composed titles and found their own music style, still influenced by their favourites. Still unsigned they were invited to the legendary 2nd German Rock Festival on Burg Herzberg in summer 1971, where all leading German groups, from Frumpy to Guru Guru got together and the big audience was impressed by For Example. In 1972 they´ve fought in vain for the release of a album on CBS records. A demo tape had been produced at Jankowski Studio in Stuttgart, but after a change of the management, CBS was not further interested to release the recordings.
That´s why the band called these "Cancelled". The SWF broadcast invited them in 1973 to do a recording session of 4 titles. This is the chance to listen to a long forgotten band. 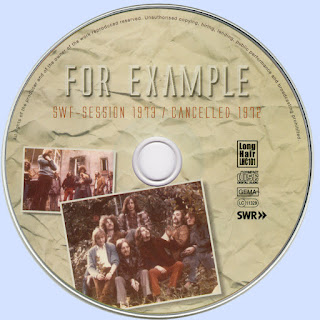