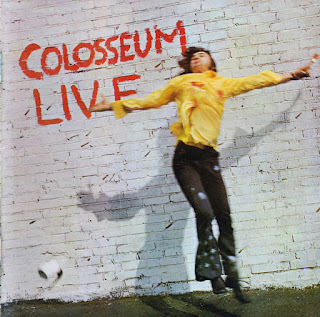 A remarkable feature of Colosseum Live was the inclusion of one of the more unusual numbers in the band's repertoire, namely Michael Gibbs's outstanding composition "Tanglewood '63." This was a brave piece for a six piece jazz rock band to tackle since the original version (aside from a version recorded by Gary Burton's quartet in 1982) was made by Gibbs for his second big band album for Deram in 1971. But Gibbs plus Colosseum members Jon Hiseman, Dick Heckstall-Smith and Dave Clempson had also performed this track, as members of the New Jazz Orchestra, at the Jeanetta Cochrane Theatre, London on 26 May 1970 (a CD of the concert eventually being released on the Dusk Fire label in 2008 and going under the title of Camden '70). The version of "Tanglewood '63" heard on this re-mastered Colosseum Live album meticulously reflects the labyrinthine and complex arrangement of the piece. The Colosseum version also utilises vocal harmonies to replace some of the original instrumentation and most notably the voice of Chris Farlowe, whose ability to sing intricate melody lines proves beyond doubt that he was not merely an impressively powerful rhythm and blues singer.

The original Colosseum Live LP was released in 1971 on the Bronze label, the content gleaned from concerts recorded in the United Kingdom. Tracks included Jack Bruce's "Rope Ladder To The Moon" and Graham Bond's "Walking In The Park" which was Colosseum's hugely popular signature tune. Then there were some frenetic blues tracks, "Skellington" and the blistering "I Can't Live Without You" (not included on the original 1971 Bronze label double vinyl release but included as a bonus track on the 1992 Sequel CD reissue). The mood was taken down a little with the classic T-Bone Walker number "Stormy Monday Blues," Farlowe's barnstorming vocals positively shining through. The Greenslade, Heckstall-Smith and Farlowe-penned "Lost Angeles" is another genuine highlight of the album, a fifteen minute tour de force proving that the band could write effective and dynamic numbers when they set about it.

This Esoteric release includes an extra CD of bonus tracks recorded in Brighton, Bristol and Manchester. Significantly there is the addition of several tracks not included on the original release including a full length version of "The Valentyne Suite," a very rare treat to hear live. Also, sandwiched between "I Can't Live Without You" and "The Machine Demands A Sacrifice" is "Time Machine," a stupendous twelve minute drum solo—where Hiseman, egged-on by a increasingly hysterical audience, proves what a technically brilliant drummer he is; towards the climactic ending of his solo he kicks his twin bass drums at almost superhuman speed. His drumming far outstripped the capabilities of the average rock drummer, which he most certainly was not. The bonus CD on this release makes this an absolutely essential purchase for all Colosseum fans, who will undoubtedly already possess a version of the original Colosseum Live.

Those who haven't heard this band before will be mightily impressed at the virtuosic talent of all the members of the group and the timeless quality of the music presented here. Therefore this is a very welcome reissue indeed from one of the pre-eminent pioneering British jazz rock outfits and one of the genre's most well-loved bands.
by Roger Farbey 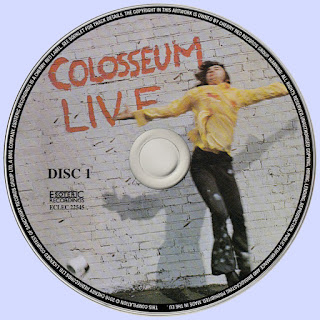 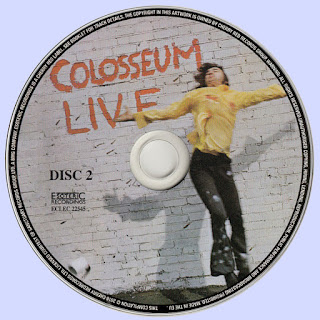 Free Text
Text Host
Posted by Marios at 7:25 AM 2 comments: