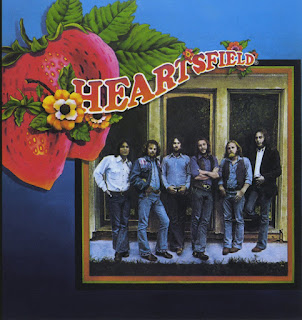 Heartsfield was formed in the very beginning of the 1970s. They were born when JC Hartsfield, who was doing some writing and playing at that time with Perry Jordan, joined forces with another band that Perry was playing with at that time, Liquid Heart.  Now you know where the name came from.

They never really did play the bar scene. From day one, they joined as songwriters, did some demos and did a few shows. The response was great right from the beginning and soon the labels were looking at them. Believe me, that’s the short version, but you get the idea.

In 1973, the band released their first album, called simply Heartsfield, it was released on the Mercury label.

The album kicks off with Perry Jordan’s “I’m Coming Home,” this song would go on to be the band’s show closer for many a year.  Three different lead vocalists and six way harmonies highlight the track.  Freddie Dobbs’ “Hush-a Bye” was another that would always be on the live playlist, and another that was one of my favorites. Phil Lucafo would give us his guitar driven blues rocker, “Gypsy Rider.” “Music Eyes” would probably be considered the bands number one track.

Perry’s “Just that Wind” is one of the jam band genres earliest classics.  Some long drawn our guitar solos are featured throughout. Another one of the bands classic numbers was the sing along “The Only Time I’m Sober is when You’re Gone.” It was written by Perry and Phil. Phil brings out the pedal steel guitar for this one.

Perry Jordan has always had a great love for our animal friends and also our surroundings.  He shares some of that sentiment here with the great, “Please Save Her Life.” This was a track that was rarely played live. That’s a shame, it’s a fantastic tune! We get a tease of J.C.’s great piece “The Wonder of It All” as the album ends. This is where the story continues in Act Two as it will be the title cut on the follow up a short 12 months later.

Heartsfield was produced by Tom Geving and the band themselves. Tom added piano as well. This version of Heartsfield disbanded in 1982.
by Larry Carta

Founding member and long-time Heartsfield songwriter, singer, and guitarist Perry Jordan has died at 62 on June 29, 2011.

Jerry "J.C." Hartsfield, 71, of South Haven, MI passed away Thursday, July 17, 2014 at Bronson Methodist Hospital in Kalamazoo, MI, due to injuries sustained in a motorcycle accident July 3rd, 2014.  He was born March 4, 1943 to James A. and Dorothy M. (Ganger) Hartsfield in Delay, Mississippi. 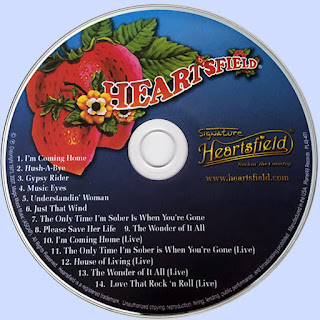 Free Text
Text Host
Posted by Marios at 8:25 AM 6 comments: