Their first of six Epic releases is a strong follow-up to the self-titled debut the same year. The album-opening "Maggie" is a perfect example of their distinctive sound, a funky, highly rhythmic itch that gets under your skin. The limitations of Lolly Vegas' singing means the all-native California quartet is more adept on faster numbers, although "Alcatraz" is a touching ballad with a seldom-heard Indian perspective. The segue on "Chant: 13th Hour" from tribal chanting to Redbone-style funk predates Robbie Robertson's similar experiments by more than 20 years.
by Mark Allan
Redbone was a Los Angeles-based group led by Native American Pat and Lolly Vegas. They hit paydirt in 1974 with the million-seller 'Come and Get Your Love.' Lead singers Pat and Lolly Vegas had previously worked under their own names, appearing in the 1965 film It's a Bikini World prior to forming Redbone. Their first success as Redbone came in 1970 with 'Maggie' on Epic. This reissue of their 1970 debut adds 2 bonus tracks 'Maggie' and 'New Blue Sermonette'. 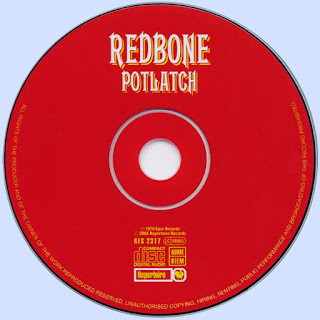