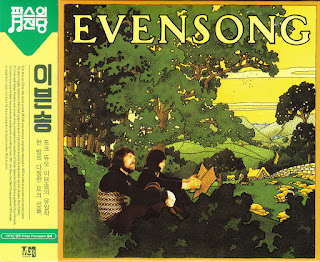 Evensong consisted of Birmingham natives, Mick Lawson and Tony Hulme. Their self-titled album was the only album the duo released, it received a fine reception at the time of it’s release, with the two going off to tour the album in America. Session players Clem Cattini, B. J. Cole, and the notable Herbie Flowers, appear on the album, as well as well as string arrangements from former Spencer Davis Group guitarist, Ray Fenwick.

Mick Lawson names Bob Dylan as one of his biggest influences, later changing his stage name to “Emmit Till” in the 1980’s, after Dylan’s 1962 song, The Death of Emmet Till. In an interview with The Birmingham Mail, Mick said, “When I was touring America in the 1970’s with my band Evensong we played at Dylan’s High School in Hibbing, Minnesota…we ended up hanging out with his uncle, who had a soft spot for Brummie folkies.”

Can’t say there’s a recognisable Dylan influence on the album, if there is, it’s very watered down (possibly a slightly noticeable influence on seventh-track, Rum Runner.) Arguably, it’s a good thing Dylan’s influence isn’t too strong, it’s not an album released to change how people perceive the world, or question society and humanity, the heaviness and truthfulness of Dylan’s lyrics wouldn’t fit on an album like Evensong; it’s an album far from reality, an escape from the difficult truths of real life. Of course singer-songwriters like Bob Dylan are extremely important, and changed the world with their lyrics, but albums like Evensong are just as needed in their own way.

A number of tracks stick out as being particularly special, Gypsy, being one of them, completely hypnotic, dreamy, and psychedelic, it’s a song that could be compared to Mark Fry‘s iconic acid-folk album, Dreaming of Alice, released the same year. The Smallest Man In The World, is another stand-out song, and possibly their most well-known track, it holds onto a childhood naivety that mimics the Incredible String Bands Hedgehog Song, among others.

The album is slightly inconsistent, in that it seems to rapidly change genre from song-to-song, one minute you’re transported to a psychedelic daydream in Dodos and Dinosaurs, straight into the gimmicky, I Was Her Cowboy, with an all-American rock 'n' roll feel, and a country tinge. Then straight back into a world of psychedelic-folk with Store of Time. It’s as if someone’s clicked their fingers in your face, a jolt back to reality. Maybe it’s a good thing…the album might just be too dreamy if it weren’t for the songs that break it up a bit – the ‘adverts’ of the album. That aside, it’s an incredible album, it’s strong points overpower it’s weaker points by a million to one.

The album makes perfect listening on these warm hazy summer days, a soft and dreamy trip to a kaleidoscopic world of sunsets, sunshine, and sunflowers.
Moof-Magzine 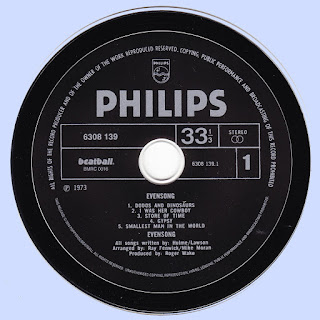