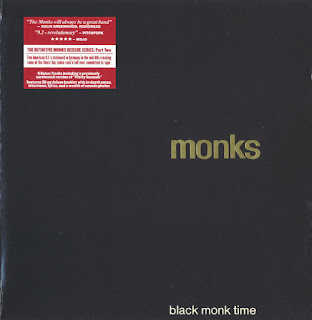 The Monks story is, it's true, one of the more truly odd ones in annals of rock. But if it were only about their biography, that'd be one thing; and, instead, Black Monk Time is another thing entirely, far more than the product of an anecdote.

The one and only album for the Monks is one of the 'missing links' of alternative music history. Their simple, rhythmic, distorted, confrontational take on rock'n'roll earnt them few admirers at the time, but, with four decade's worth of hindsight, the still-thrilling Black Monk Time stands as possibly the first punk record, and is the obvious birthplace of krautrock.

It's 1964, and five American GIs, living in post-war West Germany, form a rockband. In the beginning, they're a generic, Beatles-aping beat-group, but soon they undergo an evolution into something they called the "anti-Beatles."

Taking under the wing of a pair of Situationist-minded, German advertising gurus, Walther Niemann and Karl-H.-Remy, the Monks are rebranded as a conceptual vehicle.

Composing a point-by-point Monks manifesto, the German managers re-sculpt the Monks as a reactionary outfit whose singular devotion to their band and newfound desire for audience-baiting are symbolized in one singular external gesture.

The Monks take to wearing black cassocks, with tonsures shaved on their heads, and nooses hung around their neck. Their only religious devotion is to the road; the band traipsing throughout West Germany playing show after show, often to audiences who despised them.

The Monks were clearly ahead of their time. With the gift of hindsight, we can see their music —as Julian Cope pointed out in his authoritarian tome Krautrocksampler— as being a clear link between the beat-music of the '60s, and the German krautrock of the '70s. Unlike their contemporaries, the Monks played with a slavish devotion to rhythm. Drummer Roger Johnston played a kit with no cymbals, relentlessly hitting on the beat. Dave Day played a banjo, but treated it more as a percussion instrument; his muted powerchords thumped out as dulled, metallic rhythms.

Black Monk Time is the sound of a combo drilled tight, sounding at once restrained and furious. Largely dodging familiar verse/chorus templates, its songs often lock into repetitive riffs like a needle in a lock groove, occasionally breaking to a complete stop, starting again after irregular pauses. It's, compositionally speaking, fascinating listening; something rock'n'roll of this era rarely is.

Over this rhythmic racket, guitarist Gary Burger lets out frantic yelps; squawking nonsense phrases and ad-hoc poetry with as little sense of melody as his band has. Showstopping opener "Monk Time" —essentially the band's introductory call-to-arms— is still the best example of the idiosyncratic Monks; Burger spewing the poetic equivalents of pop-art ("My brother died in Vietnam/ James Bond, who is he?/ Stop it! Stop it! I don't like it/ It's too loud for my ears") over a frenetic, unchanging tempo. It's lively, alive stuff, even 50-odd years on.
by Anthony Carew 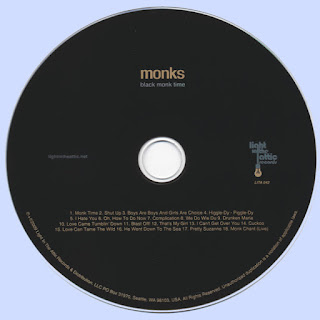