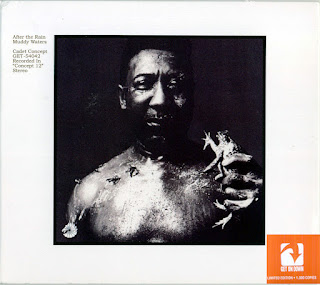 Though Muddy Waters was no cadet by the time After The Rain emerged in the Spring of 1969, it was only his fifth studio album. It came on the heels of Electric Mud, his much-vaunted “psychedelic” album that was panned on release, though it sounds pretty decent in hindsight.
In theory this album is more Muddy than its precursor, full of songs he wrote or associated with him, though the picture of him looking weird with a frog in his hand is fair warning that this is not trad blues.
Again he’s in the company of Chess’ young dynamos: the great Charles Stepney co-produces with Marshall Chess and Gene Barge; the deliberately intrusive lead guitar is played by the underrated Phil Upchurch, and that’s Morris Jennings (Ramsey Lewis, Superfly) on drums.
It’s not quite the clash of cultures Electric Mud was perceived as; it doesn’t all work but when it does, it really works. It improves as it goes on: Rollin’ And Tumblin’ becomes a funky blues that you can imagine turning a beer shack to matchwood; the aiming-for-abstract Bottom Of The Sea, with riffin’ cellos and guitars like distant kelp, is amazing.
Honey Bee could almost be normal Muddy, Blues And Trouble flips another funk grenade on your ears and the album closes with two tunes played kinda straight. Kinda.
Muddy doesn’t pretend to be anything other than himself – BS might be goin’ on but it don’ bother me – which is what makes it work. Far better than you feared.
by Ian McCann 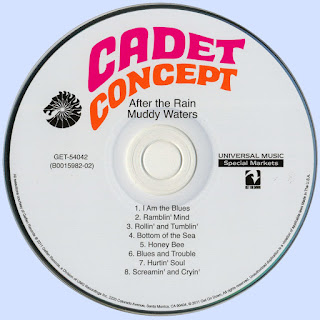