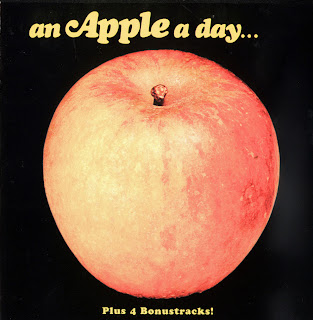 Apple came to Larry Page's attention via their first single issued on Smash records, "Thank You Very Much"/"Your Heart Is Free Just Like The Wind" in early 1968.

As a result, Page's record label, Page One Records, released their sole LP, which is a fine mixture of psych pop and psychedelic, heavy r&b. Two singles preceded the LP's release, "Let's Take A Trip Down The Rhine" (Oct 1968) and "Doctor Rock" (Dec 1968).

However, with little to no promotion for the record or the band, despite a colour brochure extolling the virtues of apples as supplied by the British Apple & Peau Development Council, the record didn't sell.

Despite having some of the finest British psych moments (i.e. "The Otherside", "Buffalo Billycan"), only a limited number of copies were pressed. In result, it is listed as one of Record Collector's Top 20 most collectable albums of all time.

However, thanks to a 1994 reissue on CD by Repertoire Records, An Apple A Day has finally been able to reach a larger audience than when it was first released.
Tripod 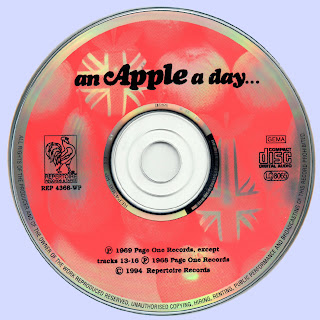