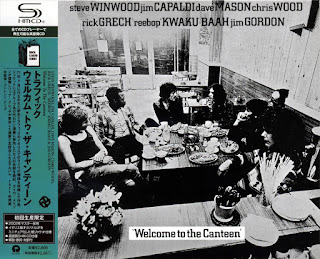 This is UA's long-promised, contract-fulfilling, Traffic live album though a new recording evidently much changed from the destroyed earlier tapes, and with no outright mention (aside from the familiar quadripartite interlocking symbol) of the Traffic name, probably because nobody, including Steve Winwood himself, could ever tell you who or what the group consists of at any given time.

The six tunes included in Welcome to the Canteen are all repeats, indeed near duplicates, most of them, of songs from previous Traffic/Spencer Davis/Dave Mason albums. Everybody's cutting quickie live albums these days, so why not Traffic too but why not some new or unfamiliar material to accompany this Walking-down-Memory-Lane stuff?

On the other hand, the old quartet never especially remembered for their stage excitement, but here augmented by three other musical blokes was in tiptop form on the two nights these performances were taped. Winwood's in fine voice, Mason's guitar playing just gets better and better, and Chris Wood's sax/flute comments are invariably tasteful. Only Jim Capaldi seems to have little to do, since Jim Gordon's over from the States to hold down head drum chores, along with the fancy Afro hand-drumming of someone named Reebop Kwaku Baah. (A moment of respectful silence for all those black Africans who keep cropping up on English rock albums: Dudu Pukwana, Remi Kabaka, Rocky Dzidzornu, et al.) And unassuming bassman Rick Grech adds rock-solid bottom to this band of renown. A redoubtable assemblage of musicians, to be sure.

Altogether, they do manage to pull it off starting slow, but getting into some chef-d'oeuvre canteen-cooking by the end of Side Two. The percussion trio is a particularly felicitous touch; more rhythmic rock you could not ask for. But other than Mason's crisp guitar and Winwood's droning organ, that's all Medicated Goo and Shouldn't Have Took More Than You Gave, respectively, have to offer. The previous studio versions win out.

Similarly, 40,000 Headmen receives a warm, slightly slowed-down, but percussively perky performance; yet it's not much more than a close copy of the haunted and exquisite. English soul treatment this song got back on Traffic's second album mystery R&B, echoing twin flutes, odd moments of percussive accentuation, perhaps the definitive Traffic tune. Only Sad and Deep As You from Side One really improves on the original; Wood's fluttery, breathing flute miraculously more-than-replaces the splendid piano from Mason's album and Dave himself has never sung more feelingly.

It's Side Two that has the stand outs. For them, Steve and the boys slide way back to '66 and '67, to latch onto Gimme Some Lovin' and Dear Mr. Fantasy. What a looking back! Eleven swirling, blending, building, wondrous minutes of Fantasy with Winwood as pensive/yearning/mournful as ever: Do anything to take us out of this gloom, Sing a song, play guitar, make it snappy. Gordon and his cohorts make it bouncy and snappy, all right, all the way up to a wall-of-sound frenzy. And Mason and Winwood, play dual guitars to beat the band, alternating clean and dirty solos from first to last. This is the spirit and the music that Traffic's other live release never achieved.

As for Gimme Some Lovin', stand back. From an all-time great three-minute single to a nineminute eternal experience, comin' at you like a fast freight with cowbell clangs, conga/timbale wheeling, and Gordon driving all, demolishing his drum-set en route plus guitar riffs, bizarre sax honks, and Winwood's organ dancing and moaning around his soul-shout, on and on into the night. Shake your ass and stomp your feet.

In-person, this Traffic proves itself to be right up there with the old Dead and the new Allmans. What more could you ask for?
by Ed Leimbacher (Posted: Oct 28, 1971) 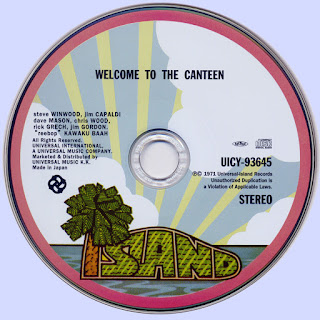 Free Text
the Free Text
Posted by Marios at 3:20 AM No comments: