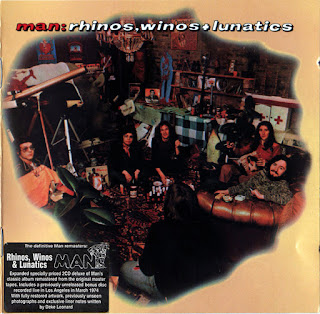 1974, another year, another Man album and, inevitably, a change in line-up for the Welsh band that refused to lie down. Stalwarts Micky Jones and Terry Williams remained and, somewhat surprisingly, Deke Leonard was invited back into the fold after having been ignominiously sacked before the bands previous album Be Good To Yourself At Least Once A Day. Obviously he had been redeemed for his irredeemable nihilism! Or perhaps it was just because the Man band fancied recruiting two members of Iceberg, Leonard's solo band. Those two members were Malcolm Morley and Ken Whaley, both of whom had previously been in Help Yourself signed, like Man, to United Artists. For the first time the management suggested that Man work with an outside producer and roped in Roy Thomas Baker, fresh from recording the second album by an up and coming band named Queen. Although the band initially resisted, they soon found that their level of playing reached a new peak under the gifted ears of Mr Baker.

Written, recorded and mixed in under three weeks, the quality of the album defies the seemingly effortless ease with which the group could come up with new and exciting material. The reinstatement of Leonard provided a foil for Jones to play off resulting in some great multi-layered guitars all over the album. Taking The Easy Way Out Again is the sprightly opener with a naggingly insistent guitar riff while The Thunder And Lightning Kid has a degree more funkiness to it with keyboardist Morley taking over on vocals and even contributing some guitar. California Silks And Satins is more laid back and the only track not composed by the whole band, having been brought to the recordings sessions by Leonard and Morley from the Help Yourself days. On Four Day Louise the band really gel with the twin guitar and underpinning keyboards making it a popular live number.

Side two of the original vinyl version of the album started with the brief instrumental Intro which segued straight into the lovely Kerosene where Ray Thomas Baker's influence is more instantly heard. Rich harmonies and an almost sleazy guitar takes the band into a totally new area far removed from what had gone before. However, it was not all change as Scotch Corner is a more traditional Man number, extended instrumental sections with the feel of unrestricted jamming, all with a smooth sheen taking the edge off the rougher edges. The album is rounded off with another short instrumental appropriately called Exit and, as a bonus, the single mix of Taking The Easy Way Out Again.

However, the real bonus comes with a previously unreleased live recording taped during the band's first American tour at the Whiskey A Go Go in Los Angeles in March 1974. And as an extra bonus the recording features saxophone maestro Jim Horn who had happened to turn up to the gig accompanied by his sax and offered to join the group on stage. A true musical genius, his contributions are outstanding, particularly considering the first time he heard the songs was on stage that evening! Of course, the band had to step up to the mark to avoid being overshadowed by their illustrious guest, and boy they did just that. There are plenty of live man recordings available so what does this one have to offer over all the rest? Well three genuine Man classics, two of which are a shade under twenty minutes each, an openness in the playing, a shade more experimentation and some awe inspiring sax playing. Should be enough for anyone!

Once again Esoteric have excelled in this reissue, they understand exactly what the fan wants from a quality reissue. The fact that there is some excellent music as well is rather a bonus!
by Mark Hughes 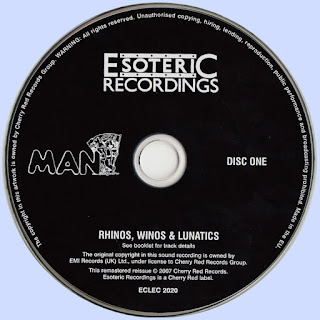 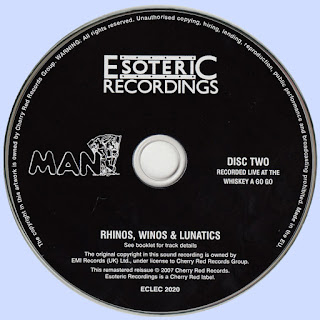 Free Text
Text Host
Posted by Marios at 5:57 AM 4 comments: