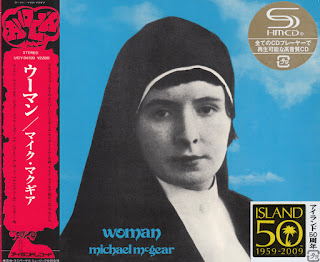 Michael McGear—nee McCartney—has a pretty amazing big brother, and surprisingly, his musical career has been low-key and somewhat anonymous. He could have exploited his surname, but chose not to; standing on his own merits is a commendable act; thus, when his comedy troupe Scaffold had a hit in 1967 with the single “Thank U Very Much,” many people were surprised to learn that the handsome fellow was the brother of a Beatle. Scaffold would run its course, yet McGear was still interested in pursuing a singing career, soon gaining a solo record deal with EMI. With this opportunity, he wanted to make a more serious, straightforward record, and thus was borne Woman.

In many regards, Woman is a fairly typical debut album from a new artist. It’s not unified or dominated by one particular sound or style, save for the to-be-expected moments of levity that recall The Scaffold, thanks in part to the inclusion of his collaborator, Roger McGough, who co-wrote several songs on here. The whimsical heartbreak of “Bored As Butterscotch”—a melancholy melody tempered with a delightfully amusing metaphor and a drop-dead gorgeous arrangement, complete with gospel choir harmonies—is pure McGough, and sounds positively Rutlesesque. Yet opening song “Woman,” is another co-write, and instead finds McGear giving Brian Wilson a run for his money, a beautiful, hushed ballad that only grows more beautiful with the slow-rising harmonies. Listen once, and you’ll like it; play it again, and you’ll become more enthralled with this simple yet heartfelt song.

But Woman is the sound of exploration, and there’s one name that keeps coming to mind: Elton John. Piano is at the forte for most of these songs, and McGear’s voice is similar; it doesn’t hurt that both shared a love of British music hall and gospel; thus, numbers like the gospel joy of “Sister” and funky “Young Young Man” are earnest, and without the comedic element, it shows that McGear was an impressive young talent who didn’t need the shtick to write a good song. And there are one or two curveballs you might not expect; “Uptowndowntown” is pure Acid Rock—and what’s more, it borrows quite liberally (intentionally or not) from Yoko Ono Plastic Ono Band’s “Why?,” but then turns into a great little blues rocker on its own, while the closing, eight minute medley of “Black Beauty/Tiger/Strawberry Jam” is a stark boogie-woogie rock number that shimmers and burns quite nicely, showing that if there were any familial predilection for light, fluffy McCartney-esque pop, McGear wasn’t going to completely indulge it this time round.

Unsurprisingly, EMI didn’t know what to make of Woman; they had expected a record more akin to the Scaffold hits. Thus, a stalemate took place, and the label refused to release it; Island Records came to the rescue, buying out the record, and though it did see release, it made only a minor impact. Shortly after its release, Scaffold would reunite, and McGear would go on to release one more solo album proper, 1974’s superb and underrated McGear—a masterpiece on its own, and one deserving of its own reissue. Though he hasn’t released much since, save for a handful of singles, he does still perform on occasion, and has enjoyed a quiet family life in his hometown of Liverpool.

Considering what McGear wanted to accomplish with this solo turn, one might be tempted to make comparisons to…well, you know. Don’t, please, because that’s an unfair comparison, and one that might handicap your listening experience, because Woman is a delightful record.
by Joseph Kyle, May 31, 2017 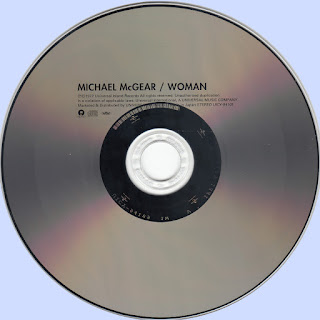 Free Text
the Free Text
Posted by Marios at 4:57 PM No comments: