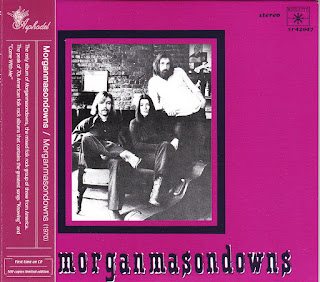 Mad Morgan and Steve Downs had met in New Orleans and found brotherhood over two guitars and a gallon jug of red wine at a party.

At that time Mad was the leading actor in the Front Street Repertory Theatre in Memphis and had visited friends over the holidays in the New Orleans Repertory Theatre where Steve was appearing as Puck in a production of Shakespeare's A Midnight Summer Dream.

On returning to New York months later, they ran into each other aand began writing a Bradway musical together. They performed the songs from the show for music publishers who encouraged them to write and record an album.

Mad and Cass were lovers at the time. Cass had been recording with the Trout and left to begin singing with Mad and Steve. Morgan Mason Downs was born. Roulette records signed them for an album and the rest is history.
CD Liner Notes 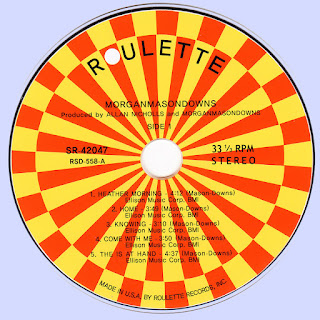 Free Text
the Free Text
Posted by Marios at 9:05 AM 1 comment: