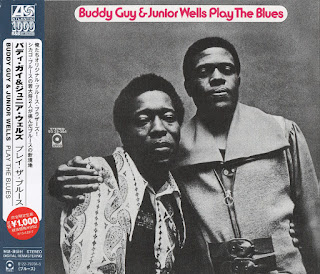 Considering the troubled background of this album (Eric Clapton, Ahmet Ertegun, and Tom Dowd only ended up with eight tracks at a series of 1970 sessions in Miami; two years later, the J. Geils Band was brought in to cut two additional songs to round out the long-delayed LP for 1972 release), the results were pretty impressive. Buddy Guy contributes dazzling lead axe to their revival of "T-Bone Shuffle"; Junior Wells provides a sparkling remake of Sonny Boy's "My Baby She Left Me," and Guy is entirely credible in a grinding Otis Redding mode on the Southern soul stomper "A Man of Many Words."
by Bill Dahl

Legend has it that Junior Wells and Buddy Guy first met in 1958, when recent Chicago transplant Guy beat Wells in a Battle Of The Blues competition, even though Wells was the established player on the Windy City scene. The two played together at the 1967 Newport Folk Festival and opened for The Rolling Stones on their 1970 tour. That tour was the catalyst for the recordings on this album, originally released in 1972.
When the Stones played Paris, Guy-Wells disciple Eric Clapton came over for a visit, joining Guy onstage for a few numbers. Backstage, Clapton suggested to Atlantic's Ahmet Ertegun that he sign the two bluesmen. Ahmet agreed if Clapton agreed to produce the record. The deal was struck, and sessions got underway at Criteria Studio in Miami. Unfortunately the album took two years to be released, during which time some of the post-Woodstock blues buzz had subsided.
Although the Guy-Wells partnership was vital well into the '80s, Guy enjoyed his greatest commercial successes after the partnership ended, winning five Grammys -- beginning with 1991's Damn Right, I've Got The Blues -- and a record 21 W.C. Handy Blues Awards. Wells died in 1998. 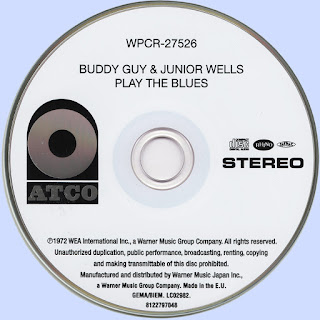 Free Text
the Free Text
Posted by Marios at 11:20 AM No comments: