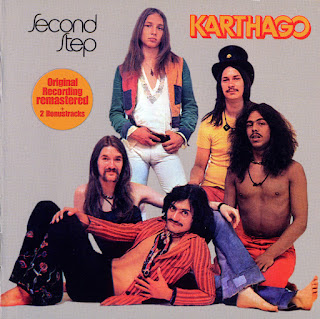 Karthago were founded in Berlin by Joey Albrecht (guitar, vocals, originally from Hannover) and Gerald Luciano Hartwig (bass). Since 1968, they had performed together in clubs as the duo Blues Machine. In 1970, they engaged the Bolivian percussionist Thomas Goldschmitt (mainly hand percussion) and soon landed a recording contract with BASF. Just a month before the recordings of their first album began, two additional members were added to their line-up: Ingo Bischof (keyboards) and Wolfgang Brock (drums). "Karthago" was recorded in October 1971 at Audio Tonstudio, Berlin with Dieter Zimmermann producing and Stan Regal engineering. It was released in a spectacular, inventive and expensive six-part fold-out cover with several die cuts!
Certainly a lavish package, recalling the multi-coloured and psychedelic Santana album designs - but actually outdoing them! Karthago's sound was graced with excellent heavy guitar work and the funky, gutsy vocals of J. Albrecht, recalling the Jimi Hendrix Experience and the heavy progressive funk band Funkadelic. The best tracks in this style were "Why Don't You Stop Buggin' Me Babe" and "String Rambler". Others, like the catchy little instrumental "Nos Vamos", had a more distinct Latin character, very much like early Santana. This is a very underrated album! Few other German bands recorded music in this particular style.
More Santana-esque instrumental work was present on "Second Step", recorded at Windrose Dumont Time, Hamburg, May 1973, with C. & M. Hudalla producing. This was much more of a joint group effort, balanced between jazzy keyboards, heavy guitars and South American rhythms. Most of the material was great, but Ingo Bischof's compositions were a bit out of place - his songs were almost singer-songwriter type of ballads! Original drummer W. Brock had left for The Rattles in February 1973 and was replaced by Norbert 'Panzer' Lehmann on this album.
Collecting-Tull