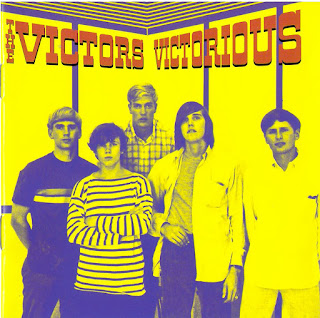 “Before there was the Litter, there were the Victors. Including two future members (bassist Jim Kane and vocalist Denny Waite) of that fab Minneapolis combo, the Victors didn’t have the psycho-destructo stage show, fiery sound, and psychedelicized pyrotechnics of their successors. But their repertoire of British Invasion covers laid the groundwork for the Litter, and they had the teen garage sound that propelled them to battle of the bands victories and into the hearts of garage fans when five unreleased recordings were first unearthed by Arf! Arf! on The Scotty Story (now out of print) in 1993.

Victorious expands the Victors’ legacy with not only those five, but also 21 previously unreleased tracks, including eight relics from their beginnings as a surf-styled band, a stunning seven-song demo tape, five spirited covers from a 1966 rehearsal, and a raw romp through “Gloria” (or “G-L-O-O-R-A,” as they erroneously spelled it!) straight off an acetate. It also includes the now legendary 1965 Scotty single, “Beer Bust Blues” b/w “Scotch Mist,” in which four-fifths of the band (billed as the Scotsmen) romped as their friend Pete Lokken did his best “Surfin’ Bird”/“The Crusher” vomit-tone into the mike.

Victorious traces the evolution of the Excelsior, Minn. miscreants from a ’64 surfy combo (named after a Dick Dale song, “The Victor”) following in the footsteps of the Trashmen and fellow Minnetonka high school pals the Ready Men and the Yetti Men to a British Invasion-styled combo covering Them and the Yardbirds in 1965—before it was cool.

It was all over for the Victors by 1966, but their legacy lived on when Kane and Waite joined former members of the Tabs to form the Litter, a band that grew from garage Yardbirds roots into one of the most innovative hard rock bands on the scene by the late ’60s—and that has been documented on four Arf! Arf! CDs. Victoriousadds to that legacy with 31 stompin’ tracks and an extensive 20-page book featuring tons of archival photos and graphics, a band history by Doug Sheppard of Ugly Things magazine, and recollections from their producer, Warren Kendrick, the man who wrote and produced the Litter’s definitive version of “Action Woman.”
ArfArf-Recs 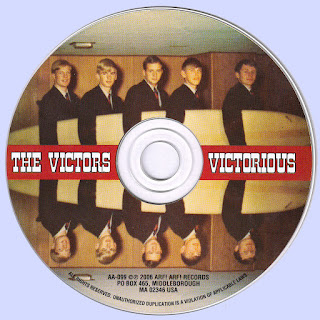