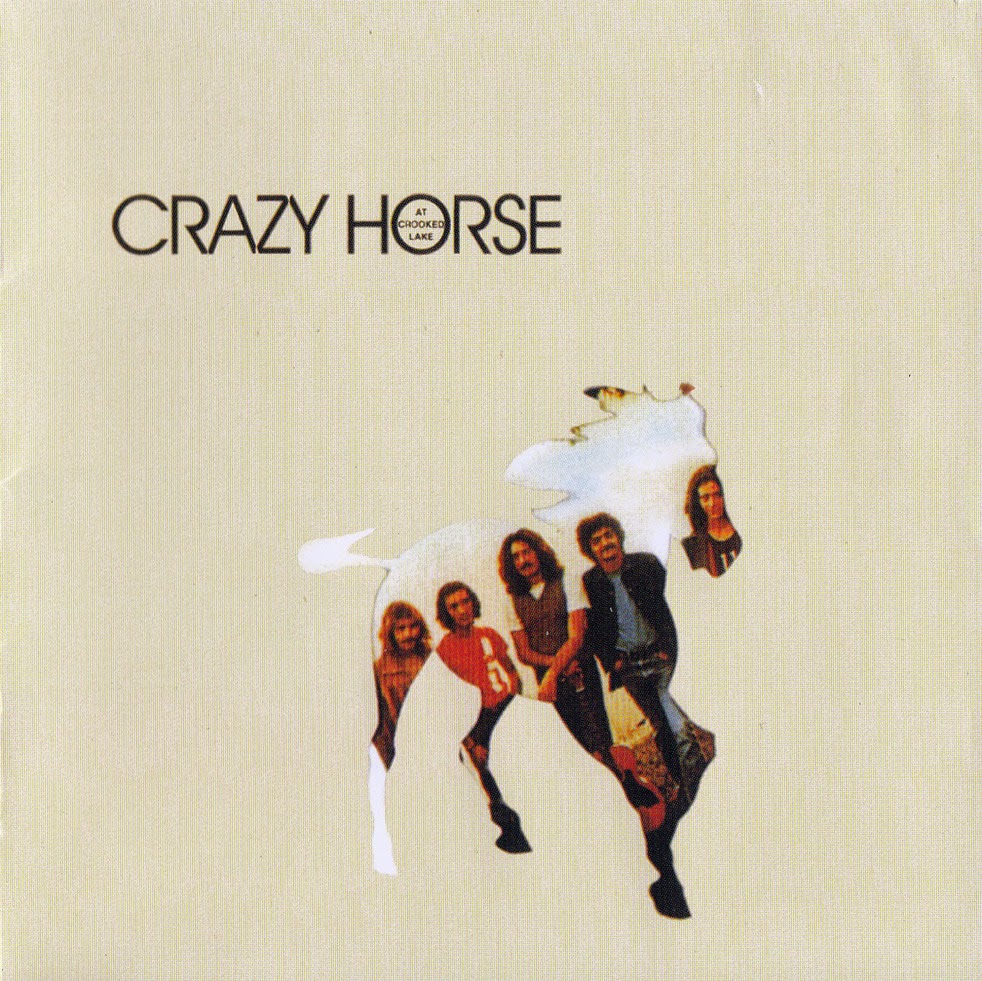 Most of you will know Crazy Horse as Neil Young's backing band who have been his musical cohorts, off and on, since joining him for his classic second solo album "Everybody Knows This Is Nowhere" in 1969. Indeed, they still play with Neil even now, both live and on record. What is less well-known is that between 1971 and 1989, Crazy Horse released five albums, three of which were released between 1971 and 1972! "At Crooked Lake" was their third album, being released on Epic Records in late 1972.

Crazy Horse, as a band, had anything but a stable line-up. In fact, they have the distinction of having a different line-up on each of their albums, the only constants being Ralph Molina [drums] and Billy Talbot [bass]. In that respect, they have had a similar history to Fleetwood Mac, where the rhythm section forms the basis for a fluctuating line-up of front persons.

By the time Crazy Horse recorded "At Crooked Lake", former members Nils Lofgren [guitar] and Jack Nitzsche [keyboards] had moved on and their main singer/songwriter Danny Whitten had sadly died from an overdose. Whitten is best remembered for penning "I Don't Want To Talk About It" which has been covered by many artists, most notably Rod Stewart, who had a number one hit with it in 1977 [thus keeping "God Save The Queen" by The Sex Pistols from the top spot]. Danny's song also reached number three in the charts in 1988, when covered by Everything But The Girl.

Crazy Horse released their second album "Loose" in 1972 but by the end of that year the line-up had changed again and for the recording of "At Crooked Lake" the band consisted of Molina and Talbot together with the Curtis Brothers [Rick and Michael] and lead guitarist Greg Leroy.

The songwriting duties on "At Crooked Lake" are split between the Curtis Brothers [six songs] and Leroy [three songs]. Despite the inconstant line-up of the band, "At Crooked Lake" is a remarkably strong and consistent album. As I said at the beginning, I was not expecting too much from this album but I was very pleasantly surprised as it turns out to be an accomplished West Coast psychedelic-tinged country rock album which stands favourable comparison with other bands of that ilk, such as Buffalo Springfield, Poco, Pure Prairie League and even The Eagles [when they were a country rock band].

The album gets off to a flying start with "Rock and Roll Band" by Sidney Jordan,which is the only cover song on the album, and a cracker it is too, with its superb harmonies, driving rhythm and powerful guitars. A great start to the album.

"Love Is Gone" is a mellow,harmony-laced country ballad written by the Curtis Brothers, which features Greg Leroy's bottleneck guitar to great effect.

"We Ride" by Rick Curtis is an excellent acoustic guitar and mandolin-based song which bears more than a passing resemblance to the best solo work of Stephen Stills [think "Love The One You're With", for example]. "Outside Lookin' In" by Greg Leroy is a prime slice of country rock which wouldn't sound at all out of place on the first album by The Eagles.

Whilst we are playing spot the similarities, "Don't Keep Me Burning" is a hard-edged blues-rock number which might well appeal to fans of Free !

Perhaps the most unexpected track is "Vehicle",which is a spacey, psychedelic piece complete with backwards guitars which has echoes of the more experimental tracks by The Byrds or, indeed, The Beatles. It's a stunning track and all the more surprising for having been released in 1972, rather than 1967.

It's back down to earth for another country rock gem from Greg Leroy, in the shape of "Your Song", which features some sublime pedal steel from Sneaky Pete Kleinow of The Flying Burrito Brothers.

One of Buffalo Springfield's greatest recordings is " Mr.Soul" by Neil Young, and on "Lady Soul" by Mike Curtis, Crazy Horse sound remarkably like their boss's old band. Nonetheless, this is a fine slab of West Coast Psych Rock.

To close the album, we have a tongue-in-cheek pastiche of a straight country song in "85 El Paso's", complete with honky-tonk piano and a seemingly drunken crowd singing the chorus.

Unfortunately, as with previous line-ups, this version of Crazy Horse did not last long as Molina and Talbot soon returned to work for Neil Young [along with Nils Lofgren and Ben Keith] as The Santa Monica Flyers, recording "Tonight's The Night" in the process. The rest, they say, is history.

It's a pity that the "At Crooked Lake" line-up of Crazy Horse did not stay together as it was certainly an accomplished band and its one album is a fine piece of work. All credit is due to Floating World for making it available again.
by Peter Cowley 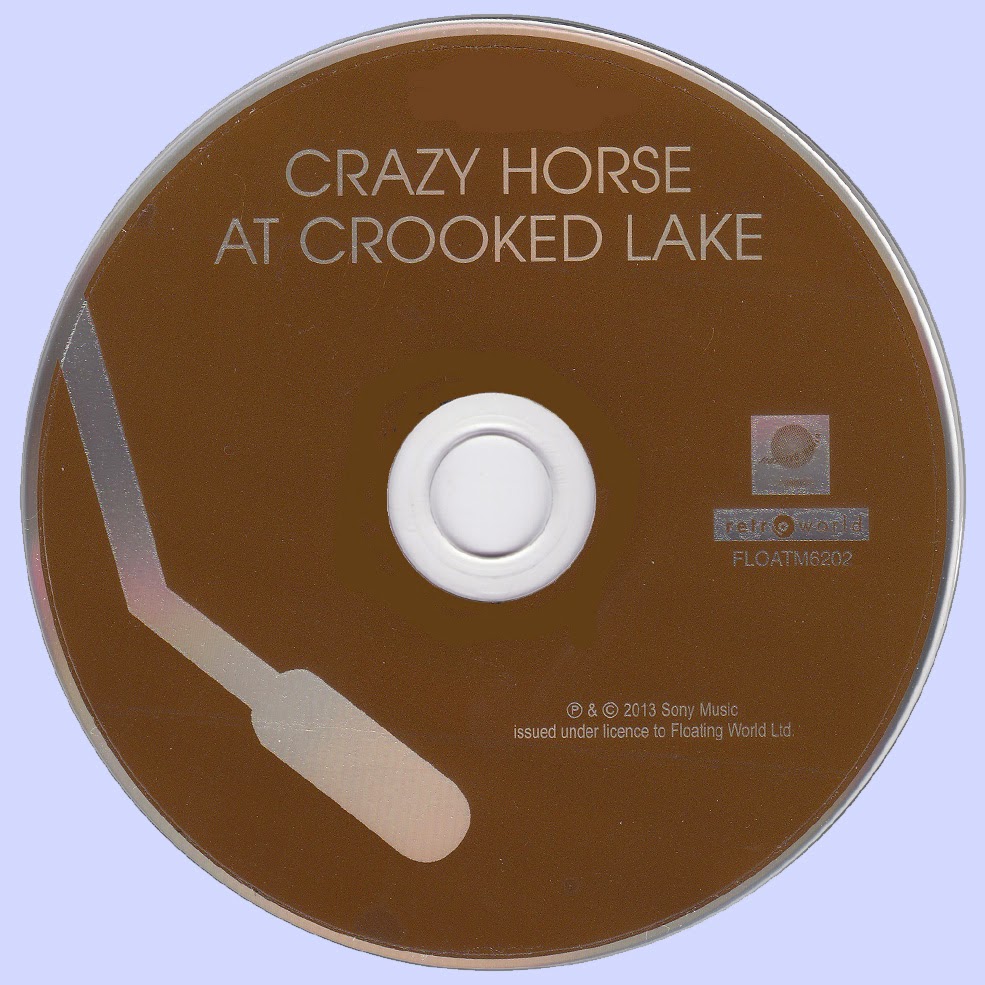