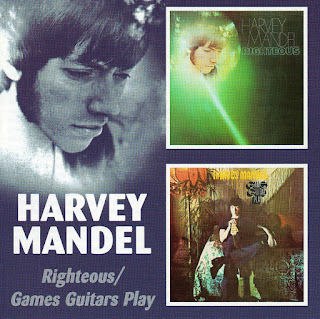 Many listeners’ first exposure to the unique, slithering guitar sound of Harvey Mandel came when the Rolling Stones’ “Hot Stuff” hit the airwaves in 1976. But Mandel’s story begins more than a decade earlier, when young white guitarists roamed Chicago’s blues clubs, learning to play at the feet of legends like Buddy Guy, Otis Rush, and Magic Sam. The release of The Paul Butterfield Blues Band in 1965, with its back-cover exhortation to “play it loud,” and the group’s East-West in 1966 showcased the incendiary playing of one of those nascent guitar heroes, Michael Bloomfield, whose raw performances on both records spoke to a new generation of players.

Harvey Mandel was also on the Chicago scene, cutting his teeth sitting in with blues legends. “Bloomfield was more on the South Side, and I hung more at the club Twist City, which is the West Side,” says Mandel. Born in 1945, he was a few years younger than the Butterfield Band guitarist, but by his late teens he was consistently jamming with the likes of Buddy Guy. “I wasn’t legally allowed in a lot of clubs because I wasn’t 21, but the owners didn’t mind,” he says. “They would sneak me in and out, making sure no one fed me liquor so they wouldn’t lose their licenses.” Shortly after becoming “legal,” Mandel made his recording debut on Stand Back! Here Comes Charley Musselwhite’s Southside Band, with a singing tone already hinting at the sustain that would help define his sound.

To many suburban blues guitarists, Stand Back was almost as influential as the Butterfield records, but because it was released in 1967, Mandel’s emerging style was overshadowed by Clapton’s work with John Mayall’s Bluesbreakers and the arrival of Jimi Hendrix. Still, Bill Graham deemed the Musselwhite band worthy to share a bill with Bloomfield’s Electric Flag and Eric Clapton’s new group Cream at his San Francisco-based Fillmore West. “I ended up staying in San Francisco, because after that show the group disbanded and everyone went their own way.

There, the guitarist met Abe “Voco” Kesh (Keshishian), a radio DJ and producer for the Mercury/Philips labels. A fan of the Musselwhite band, Kesh had just produced a No. 1 record for Blue Cheer. This let him get Mandel a solo deal with Phillips without so much as an audition. His first solo record, Cristo Redentor, in 1968, contained many of the markers Mandel would revisit over more than a dozen records and almost five decades: funky grooves with strings and horns filling out the sound, along with psychedelic production techniques like guitars panning across the stereo spectrum and flipping the tape over to achieve backwards guitar effects. Even without recording tricks, Mandel’s distinctive licks seemed at times to be going backwards, creating the serpentine sound that earned him his nickname, “Snake.”

The next year saw the release of Righteous, cementing the eclecticism that would mark all of Mandel’s music, ranging from the clean tones on Cannonball Adderley’s “Jive Samba” and the funky “Poontang” to more distorted effects on the swampy “Love of Life” and the slow blues “Just a Hair More.”
by Michael Ross

‘Righteous’ has more intriguing strings-and-guitar pieces like the torrid and nimble ‘Jive Samba’ and ‘Summer Sequence’. The third disc ‘Games Guitar Play’ broadens the scope yet again, with side one featuring Russell Dashiel a rather good singer and Mandel bringing the blues quotient up with ‘Leavin’ Trunk’ and ‘I Don’t Need No Doctor’, then on the reverse side more instrumentals including the pop-country title tune, a hit for Joe South and here played straight with a few dashes of slide guitar. A stealthy tread through ‘Capurange’ works well, as does a gorgeous reading of Horace Silver’s theme ‘Senor Blues’, at once biting but spring-heeled. This cat really IS a genius!
by Pete Sargeant 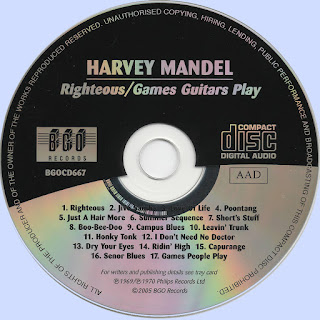 Free Text
Text Host
Posted by Marios at 8:31 AM 1 comment: