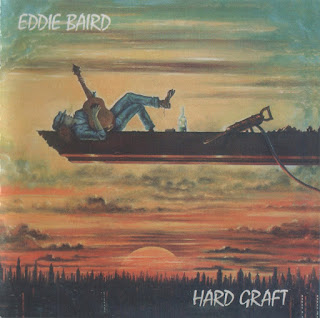 Eddie Baird is most well-known for his first (and only) recording band, Amazing Blondel, although he was also a session musician (e.g. on Paul Kossoff’s solo album) and auditioned for Dire Straits to replace Knopfler in the late ’70s. By then Amazing Blondel, one of the foremost exponents of what’s now called prog-folk (when superlatives like Amazing and Incredible String Band were legitimate not hype), were fragmented by the leaving of their principal song-writer after three Island albums. On many tours that included St. Paul’s Cathedral (on a bill with Cliff Richard!), they forged their own distinctive style that was as outside folk as it was any mainstream.
Forty instruments for medieval-style ballads mixed with bawdy humour. Tuning the final lute, the first would be out of tune in the hot concert hall, until they had built 7-string guitars tuned to them with internal amplification, to play alongside 12 and 6 strings, crumhorn, cittern, the orbo, flutes, ocarina (also used by Dr. Strangely Strange), glockenspiel, and assorted keyboards and percussion. Group harmonies also required specific tunings: these guys knew their stuff! Shades of Jethro Tull’s and Forest’s whimsy from periods of yore, ISB’s inventiveness, and Dr. Strangely Strange’s uniqueness, with more breadth than Gryphon or Third Ear Band who, sadly, rarely went into the realm of comparable beauty.
An early influence for Baird were The Shadows and Everly Brothers while in a school band that gigged for £2.10 shillings shared five ways (Spangles and Squash presumably rather than Whisky Macs). Typical school-leaving manual jobs then photographer on the Scunthorpe Evening Telegraph, the locale of Blondel, didn’t interrupt gigging as far afield as Brigg, which attracted the attention of two professional musicians: John Gladwin and Terry Wincott. They had recorded an album with Methuselah, heavy prog rockers whose acoustic interlude live prompted their own band in ’69. Baird and a friend were invited to their house then a bit later he was invited to join them, after the debut Amazing Blondel album had been finished for Bell Records in late 1969. Four of the most beautiful band albums of the whole era appeared via Island Records from 1970-73: Evensong, Fantasia Lindum, England, and Blondel.
John Gladwin left immediately after a three-week US tour in 1973, gigs with Genesis in Germany, and when a tour with Traffic was in the pipeline. Years of non-stop touring and recording (which the band loved most) had taken its toll. Baird had contributed to the song-writing but most were written by Gladwin. Island then rang for a new album, with a deadline of six weeks. Baird wrote all Blondel in five weeks, known as the purple album (they hadn’t dropped the full name, as the LP’s back cover proves), which includes Simon Kirke and Paul Rodgers both of Free, plus Steve Winwood on bass and top session singers (Jim Capaldi had guested on an earlier album continuing the Island link). Most of the songs would grace later concerts. Three studio albums as a duo for DJM followed in 1974-76 (Mulgrave Street, Inspiration, Bad Dreams), sadly declining a little after the first that had some strong material. The label issued Live in Japan in ’77, actually recorded live in Europe though easier for the marketeers during glam then punk and disco.
Eddie Baird did session work and moved to Cornwall, when the well-known producer Tony Cox invited him to his Sawmills studio for a solo album. It was earmarked for Island but their A&R man left and the platter was shelved. This solo album is, however, far removed from that band's renaissance folk style. A classy set of concise pop rock songs played entirely by Baird, it was recorded in Cornwall, England, in the summer of 1975 and released in 1976.
by Brian R. Banks, 2016 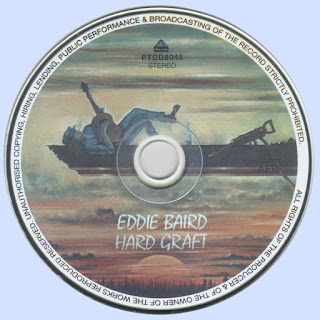