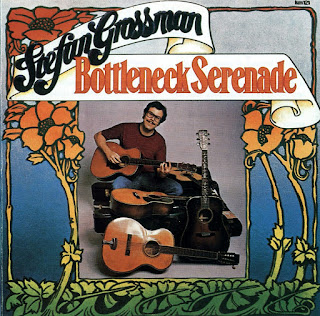 For Bottleneck Serenade, this 1975 recording from Stefan Grossman, the guitarist brought his instrumental music into a 16-track professional studio. Far from being an exercise in indulgence, however, multi-tracking and studio effects are kept to a tasteful minimum. In fact, the recordings seem to benefit from the crisp fidelity afforded by modern technology.

Working with an array of microphones and recording techniques, Grossman captures the many subtle shades of his numerous acoustic guitars. Typically, the guitarist's love of early American country blues and folk idioms is on full display, yet the compositions (the bulk of which are originals) also bear the mark of Grossman's own developing voice. He only loses sight of what roots his material on "Tomorrow, Pt. 1-3." Beginning in fine form, Grossman slows the music down to a crawl, showcasing its characteristic syncopation.

The song loses potency, however, with a misplaced guitar figure soaked in distortion and wah-wah. He then makes his way into a rather dull and unnecessary solo on acoustic guitar. At best, Grossman's perfectly distilled melodies seem built into the compositions. The overdubs on "Tomorrow" feel superfluous. The biting bottleneck showcases "Concrete Parachute" and "Delta Slide of 1928" are thrilling highlights. Choppy rhythms are comprised of abrupt, stinging steel lines, wrung from the instrument. On the spacious title track, he lets the long, shivering slide notes ring.

What brings the album to life is the sure presence of the instrument -- the intimate sound of the slide rattling against the guitar strings. Bottleneck Serenade is a fine introduction to the breadth of Grossman's work, ranging from the graceful fingerpicking of "Working on the New Railroad" and the gritty bottleneck blur of "Birdnest Two-Step" to complex original material like "Tightrope."
by Nathan Bush

Of all the instrumental albums I have worked on, this has been the most exciting to put together. At times ! felt like a painter. Instead of using a canvas, palette, and colors my tools were a wide assortment of guitars, sophisticated microphones, and the ambience of a studio; The tunes vary from guitar solos to collages of guitar sounds.

By using a 16-track lope machine I was able to overdub various guitar parts arid experiment to hear which sounds and textures complemented others.  The combination of the acoustic guitar and the advanced recording studio intrigues me and m these recordings I have tried lo combine both worlds.

Bottleneck Serenade was recorded over a three-month period while I was living in Rome/Italy and London, England.  I am very thankful to my friends who allowed me to use their studio facilities as well as the engineers who contributed many ideas.
by Stefan Grossman 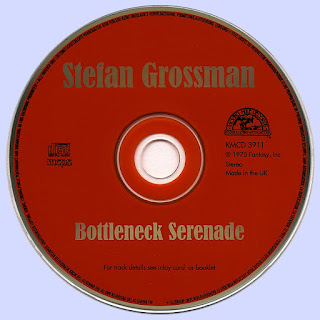