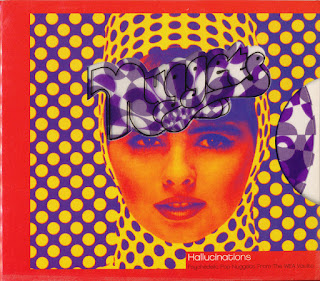 Since the first Nuggets in 1972, the entire series has been grounded in the gritty, dirty sound of garage rock, so much so that Rhino's 2001 box set of British and foreign psychedelic nuggets favored harder rock over the fruity, precious side of British psych. Collectors treasured rare singles before Nuggets, but the series created an aesthetic that emphasized the raw, trippy, wild, and woolly over the soft, lush, harmony-laden psychedelicized sounds of AM pop radio. The Rubble Collection, Mindrockers, The Trash Box -- all of them were dedicated to freaky guitar rock, and that mindset ruled until the latter half of the '90s, when the well had started to run dry, as labels like Sundazed issued the complete recorded works of obscure garage rockers who had released only one single during their lifetimes.

Around this time, collectors -- including many third-generation music fanatics raised in the era of CD reissues rather than record fairs -- began to favor the soft sunshine pop of the late '60s, when square vocal groups started to get hip and record trippy music. Bands like the Millennium, the Association, and Yellow Balloon became hip currency, as did producers like Curt Boettcher and songwriters like Paul Williams. This was close to anathema for the hardcore garage rock fiends because this was not rock & roll, it was pop music whose commercial aspirations failed. Nevertheless, most hardcore record geeks have a fondness for this stuff, since it's not only melodic and well produced, but it's terribly interesting to hear how underground ideas were borrowed and assimilated into mainstream music; often, it's as strange as it was in the underground, if not stranger.

Fans of this breed of psychedelic pop were insatiable, and there was a certain thrill to the fact that it was hard to track down, since it was either issued in Japan, buried as album tracks on reissues, or never made it to CD at all. That's why Rhino Handmade's foray into the sound with Hallucinations: Psychedelic Pop Nuggets from the WEA Vaults and its companion release, Come to the Sunshine: Soft Pop Nuggets from the WEA Vaults, is so welcome -- while they're only available as limited editions (primarily sold via www.rhinohandmade.com), they're also the first widely available American samplers of this style. That alone would make them noteworthy, but what makes them essential (at least for hardcore record collectors), is that they're expertly done.

Where previous installments of Nuggets concentrated on singles, Hallucinations is a true excavation of the vaults, picking overlooked album tracks and neglected singles from a cornucopia of WEA-owned labels, including Warner Bros., Cotillion, Jubilee, Valiant, Reprise, and Atco. While the focus is on acts that released a single or forgotten album, there are a handful of recognizable names -- the Association, Kim Fowley, the Electric Prunes, the Bonniwell Music Machine, the Tokens, the West Coast Pop Art Experimental Band -- and in the Monkees' "Porpoise Song," there's even a genuine hit. But that song is the exception to the rule: most of these are quite obscure, and it's even arguable that because they were released on major labels (or at the very least, high-profile labels), the songs haven't been given the attention or respect as psychedelia released on smaller, regional labels.

That argument is laid out in the introduction of the excellent liner notes, and the music on Hallucinations supports it strongly. Often, collections of rare heavy psychedelia and garage rock can grow a little samey even when the musical quality is high, since bands tended to emulate the same sounds and ideas, using the same production techniques as their peers. Hallucinations is a much more interesting listen than the average psychedelic rarities collection since these underground ideas are applied in bizarre, unpredictable ways to professionally written, melodic songs that were designed for mainstream radio.

Where its companion collection, Come to the Sunshine, is heavy on lush surfaces and harmonies, Hallucinations is overtly trippy and psychedelic, filled with fuzz guitars, echoes, phased vocals, organs, studio effects, and minor-key drones. This brings it closer to familiar Nuggets territory, but there's a much heavier emphasis on studiocraft and production here than there is on anything on the original double-vinyl Nuggets or Rhino's original box set; again, the focus is on the record, not the song, even though there are some excellent songs here. Nevertheless, the sound and effects of the productions are the most memorable aspects, such as the way the vocals and guitars swirl through the Next Exit's Tokens-produced "Break Away" or how Jeff Thomas' "Straight Aero," quite likely the trippiest square anthem ever recorded, has a weird undercurrent of menace in its hiccupping bass and clanging piano. Hallucinations is filled with moments as strong as this, and it makes a convincing argument that psychedelic pop is at its best when it's pure, undiluted ear candy like this. It's not just a good introduction to the charms of psychedelic pop; it holds its own next to any collection of freaky, guitar-fueled garage-psychedelic rarities.
by Stephen Thomas Erlewine 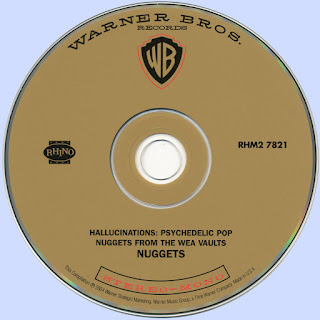