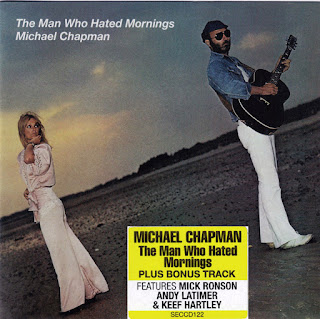 On an evident high after the previous year’s Savage Amusement had brought him to Memphis, The Man Who Hated Mornings brings it back home with sessions in Cornwall and Hull. Chapman’s sour, bleak and funny observations, shot through with moments of pure musical transcendence, are heavy on the ground.
The title track’s clangour reminds us of the bandleader’s skill on guitar, and from there, his playing cuts an elegant, purposeful swathe through mordant blues, cabaret jazz and a screaming early cut of Dogs Got More Sense. A supremely sullen recast of Bob Dylan’s Ballad In Plain D is another highlight.
The excellently recorded band features guitar from Mick Ronson, BJ Cole and Andy Latimer, but Chapman’s ruggedly defined, inimitably detailed voice and individuality (which continues to endure and multiply) shines throughout.
by Gavin Martin, December 01, 2015
Michael Chapman's The Man Who Hated Mornings might be seen as comparable to Eric Clapton's Slowhand release of the same year, and the presence of guitarist Mick Ronson (reunited with Chapman after six years spent elsewhere) does ensure that the frets get a fair workout as the album goes on. The comparison, however, has more in common with the mood of the record than any virtuoso concerns -- it is Chapman at his most laid-back, and only occasionally stirring himself into first gear.
A cover of Dylan's "Ballad in Plain D" is a triumphant highlight, seguing into Chapmans own "Steel Bonnets" instrumental to emerge a shoo-in for any "best-of" Chapman anthology. Elsewhere, there's much to be said for the wryly salacious "Why Do You Bob Your Hair, Girls," and a title track that completely eschews Chapman's folk-rock reputation for a taste of nightclub jazz. "Dogs Got More Sense," meanwhile, is a joyous slice of pop melody that could be compared to Phillip Goodhand-Tait's "Jewel," but the song that most sums up this album is a delightfully disdainful take on Danny O'Keefe's "I'm Sober Now." That may or may not be true, but Chapman has a wonderful time keeping listeners guessing.
by Dave Thompson 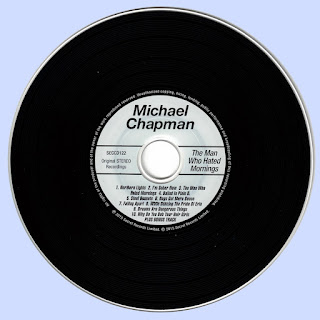