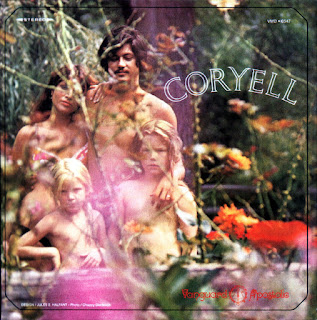 Issued in 1969 on Vanguard Records (mostly known as a folk label) this was Coryell’s second solo release. “Coryell” has also been decades out-of-print on vinyl, though reissued overseas (several times) on CD.

“Sex” opens the album with Coryell’s unusual vocal style though it is immediately apparent that the band is percolating with Rainey’s popping bass lines and Purdie’s poundings, Coryell’s solo is generational but very tasteful, as are his piano comps. “Beautiful Woman” is as ballad like as you could expect from Coryell, especially during his vocal passages, the tune moderately upshifts into appealing landscapes as Coryell (and Ron Carter’s bass) lead the proceedings with a smart and sparky jam; (*) note how Coryell really lifts off during the outro fade.

On the LP version “The Jam with Albert” is an instrumental extravaganza closing side one: It’s rhythmic, melodic, and chaotic in a good way. Purdie’s and Stinson’s bass are not only locked tight, they are intertwined setting the foundation for Coryell’s bombastic rock-jazz guitar explorations that are borderline psychedelic and hypnotic; it’s a killer 9:20 track! “Elementary Guitar Solo #5” originally opened side two’s LP, draws from J.S. Bach’s classical origins.

Shortly after the theme is initiated, Rainey, Purdie and Mike Mandel’s piano veer towards improvisational rock, (note Rainey’s bass lines – wow), as Coryell gradually pushes the pedal and accelerates. At the end there is a fitting (second) nod to Bach, too. Julie Coryell’s “No One Really Knows” brings back husband Larry’s singing, but it doesn’t last long with an (instrumental) directional deviation as a nice (somewhat spacey) jam unravels.

“Morning Sickness” originates as a fascinating instrumental that finds Rainey and Purdie in familiar surroundings setting their funky and signature styles – becomes unhinged when Coryell rips into another creative guitar solo in tandem with the famous rhythm section. The finale is the second Julie Coryell inclusion, this time instrumentally, it is the first time I noticed Jim Pepper’s flute; “Ah Wuv Ooh” is a very well written well thought out song that is also pretty and bright.
by Bob Putignano 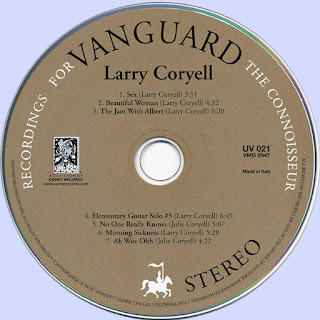 Free Text
Just Paste
Posted by Marios at 5:32 AM 1 comment: