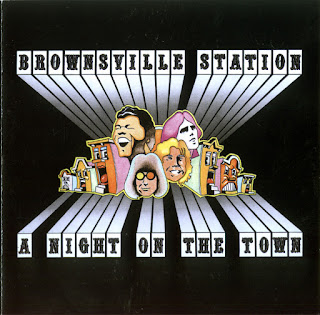 Why do so many people react with a sniff of the upturned runny nose when Detroit bands are mentioned, and why do Detroit bands come on so macho-honk self-conscious? Brownsville Station are from Ann Arbor, not Detroit, but they have always been lumped with the shortlived Detroit Bands hype, this despite the fact that most of the Detroit bands snubbed ’em mercilessly.

Why were they snubbed? Because Brownsville didn’t put on any badass streetpunk revolutionary airs, that’s why. They were just kids from the duplexes of America, not the belly of the beast, and cared shit less about politix and just wanted to rock ‘n’ roll. The Frut, good reviews of whose first album inspired a record number of why – did – you – fucking – critics – con – me – into – buying – this – piece – of – shit? letters to rock magazines around the country but were liked ’cause they played their part in the Detroit scene, once said that “We’re the guys who used to beat up Brownsville Station in the parking lot.” Maybe so, but Brownsville Station are the guys who right now will blow Frut right off the stage.

Still, I gotta admit that their new album ain’t as good as their first one, which is mainly a production problem, but so what? Their first, released on Warners nearly two years ago, was a monster, and there’s enough monstro moves in here to make this well worth shelling out a few sheckels for, in this day when most of the stuff on the radio is shit and you don’t know who to trust anymore and even the Rolling Stones have fucked up.

“Rack with the Music” isn’t particularly original, but it’ll get you off your ass. It sounds like Creedence and Sly together, but both of them are great and declining now along with lotsa other heavies, and besides, if you ever once heard Brownsville Station in your life and Leonard Feather hit you with this in a Blindfold Test you’d tag it right snappy.
“Mister Robert,” drives full throttle from here cross every dragstrip coast to coast, and is every bit as good as the fastest, furiousest things on the first Moby Grape album, and has a secret message. One thing I can tell you, it ain’t about Bob Dylan. And the lazied-back Rock Prince it’s addressed to (“Get up off your ass and move!”) could well be taken as Everystar who ever lost his fire in the fog of fame, but that ain’t quite the truth either. So listen and puzzle over it awhile, and if you’re really buffaloed you can write me a letter and I’ll tell you.

“Wanted (Dead Or Alive)” starts out with a riff so banal it took some nerve for Cub Koda to pick it up when he wanted to write a song one day, but that makes it even better, the gall and glee of that is what all this noise’s been about for most of our lifetimes now, and besides it gets into something a little more “inventive.” “Country Flavor” is currently the highlight of their live show, because it’s catchy as a bitch and has an indestructible hook and they always get the whole audience to clap and sing along and not a cynical zhlub in the house refuses, they’re that infectious. “Leavin’ Here” is Motown raved-up neat as Rod Stewart ever did and less axes to grind too, and “The Man Who Wanted More” is, believe it or don’t, a high energy takeoff on “When the Saints Go you know what.” And “Jonah’s Here To Stay” even has a fine soprano sax solo out of the Coltrane fakebook by lead singer Mike Lutz, and that takes care of side two making it 100 percent good, so what are you waiting for? The pick of the litter.
by Lester Bangs, July 6, 1972 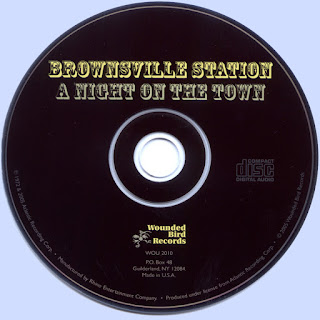