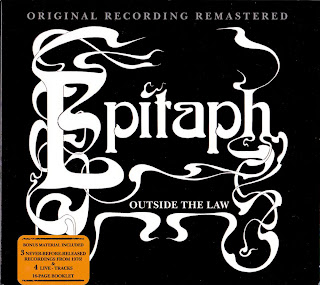 Krautrock never sounded like this. The four-piece hard rock Germans who called themselves Epitaph had no time for arty experimentalism or stoned improvisations. What they were up for was good old four on the floor blooze-rock boogie, and with 1974′s Outside The Law, they delivered.

Much of the reason things worked so well for them so well was the fact that they knew who they were from the very beginning. They liked to rock Southern style, and did so in English, for maximum effect. It is unfortunate that management difficulties kept them from finding success in the States, because with the right promotion these guys would have had a real chance at making it.

This is apparent right from the top with their Alllman’s inspired “Reflection.” It is sort of a German “Ramblin’ Man,” and a great lead-off for this their third and final album. The group leave plenty of room for guitar solos, courtesy of Cliff Jackson and Klaus Walz – who take ample advantage during songs such as the title track.

“Tequila Shuffle” is another example of their great dueling guitars. Towards the end, both players face off as if re-enacting the axe-duel at the close of the old Ralph Macchio finds-the-blues flick Crossroads (1986). As a nod to the times, the album concludes with an extended magnum opus; “Fresh Air.” You gotta love it when a band take four minutes just to find the riff. To their credit, when Epitaph lock into the groove, they do not let it go for nine solid minutes.

Thanks to the previously mentioned management troubles, which at one point saw the diminutive Irving Azoff ready to sign them, Epitaph broke up after Outside The Law. They did however record three songs in 1976 for what would have been their fourth album. The MIG label has just released Outside The Law on CD for the first time, and have included those later sessions as bonus tracks.

These three tunes actually bode quite well for a “might have been” scenario. “Train To The City” is much less derivative of the Southern rock thing, and in fact reminds me a bit of something off Blue Oyster Cult’s Agents Of Fortune album from the same year. Likewise “Wasted So Much Time” is a road-weary track that could have fit next to “Movin’ On” from Bad Company’s debut. The other Bicentennial year entry is “Kind Of A Man,” which has classic Allman Brothers written all over it, but that’s just fine – if you are going to be influenced by another group, the original Allmans make one hell of a template.

The four remaining extra cuts hail from a reunion concert which took place in 2000. Three of the these are from Outside The Law: “Woman,” “Outside The Law,” and “Big City.” “Jim’s Thing – Drum Solo” features three minutes of Jim McGillivry beating the holy crap out of his skins, and bringing us back to the good old days of the drum solo.
by Greg Barbrick 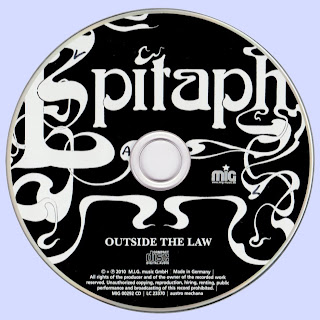