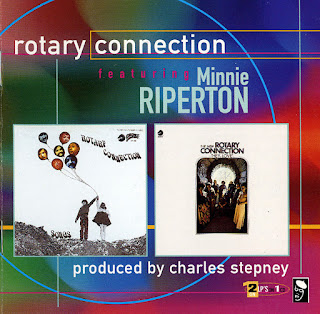 It could have been an almighty mess and for years critics asserted that it had been but the rock-meets-soul experiment that was the Rotary Connection became a sonic tour-de-force. Don't take my word for it, judge for yourself as BGP bring you their two most sought-after albums in a single package.

The brainchild of Marshall Chess, and the musical result of the arranging and production skills of Charles Stepney, Rotary Connection was the perfect showcase for the awesome voice of Minnie Riperton. On SONGS she is teamed up with Sydney Barnes and some local rock musicians, they take on an array of recent pop hits and blues classics that emerge as a funk rock amalgam which can in the case of their version of Cream's Tales Of Brave Ulysses or Otis' Respect still rock a dance-floor 30 years later.

On 1971's HEY LOVE Barnes had left and the band was made up of the cream of Chicago's soul session players such as Phil Upchurch and Master Henry Gibson, yet the music was no less radical. The sound was built around what had become Stepney's trademark strings, drums and bass arrangements so far ahead of their time that it still sounds fresh today. Songs such as Love Has Fallen On Me and I Am The Black Gold Of The Sun are epic pieces that shouldn't fail to touch your soul, while Song For Everyman showcases the songwriting talent of Stepney's then latest prodigy Terry Callier.

It was Rotary Connection's last stand-.-Riperton went off to live in California with her husband Richard Rudolph, scoring a massive hit in 1975 with Loving You, only a few years before she died. Stepney also died in the 70s, leaving an incredible legacy of production work from both his days at Cadet and his later work with soul mega group Earth Wind and Fire. Today, this music is as in-demand and relevant as way back then. House production legends Masters At Work slotted a cover version of I Am The Black Gold Of The Sun on their Nu-Yorican Soul project and took it into the UK charts earlier this year. Talk about staying power.
by Dean Rudland 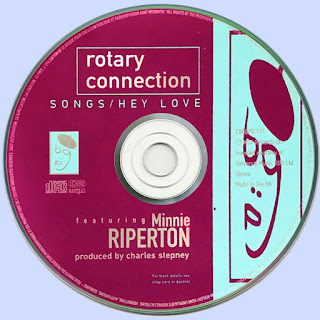