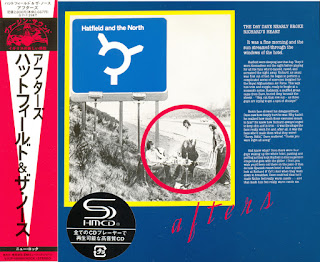 Amongst the more revered of 1970s Canterbury bands—including Egg, Soft Machine, Caravan, Gilgamesh and Gong—Hatfield and the North has always occupied a special place in the hearts of fans of this distinctly British amalgam of complex progressive music, singular lyricism and self-directed humor. A band that was seemingly over before it began, Hatfield and the North represented a major step forward for all its members; a group that seamlessly blended jazz-like improvisational abandon with detailed composition, occasional pop tendencies and a sense of humor that eliminated any potential for excess and self-indulgence...unless the group did so intentionally and with complete self-effacement.

Keyboardist Dave Stewart had already established a name for himself with Egg and Khan, though in the former the compositional duties were largely assumed by the vastly undervalued Mont Campbell, and the latter was more of a vehicle for guitarist Steve Hillage, who'd previously intersected with Stewart and Campbell in the more psychedelic, pre-Egg group Uriel (whose long out-of-print album, along with an archival disc of Egg oddities, was finally released on CD in 2007 through UK's Burning Shed). By the time Stewart was recruited for Hatfield and the North, replacing original keyboardist, Caravan's Dave Sinclair, he'd gone—seemingly overnight—from a talented, post-Keith Emerson keyboardist to one with a decidedly greater jazz bent, albeit one with a harmonic language strangely distanced from the American tradition.

Guitarist Phil Miller and drummer Pip Pyle went back to the mid-1960s and the group Delivery, though both made greater names for themselves in other places. Miller was the guitarist in ex-Soft Machine drummer/singer Robert Wyatt's Matching Mole (a clever pun on the French translation for Soft Machine, Machine Molle), which released two studio albums and, in recent years, has seen some fine archival performances issued, including On the Radio (Hux, 2007). A curious musician who, as Wyatt once wrote, "would rather play a wrong note than a note that somebody else had ever played," Miller's rapid evolution from Matching Mole's quirky but oftentimes sloppy guitarist into one with a richer vernacular and lither but still idiosyncratic approach to melody, remains one of the more under-appreciated stories in modern jazz; one that continues to this day with his group In Cahoots, and releases including All That (Cuneiform, 2003) and the more ambitious Conspiracy Theories (MoonJune, 2007).

Pyle played in the early incarnation of Gong responsible for its nascent classic Camembert Electrique (Charly, 1971) before returning to England in 1972 to reunite with Miller, his brother Steve (keyboards) and bassist/vocalist Richard Sinclair—the latter two having left Caravan, of which Sinclair was a founding member— for a new version of Delivery. An early glimpse of this group, which was the germinal Hatfield, can be heard in the bonus tracks of Cuneiform's wonderful 2007 collection of Steve Miller and saxophonist Lol Coxhill's Miller/Coxhill Coxhill/Miller / "The Story So Far..." ..."Oh Really?". Pyle—who sadly passed away in 2006 at a time when Hatfield had reformed (with keyboardist Alex Maguire replacing Stewart) for some live dates and the promise of new material—was a drummer who, more than many, combined the energy and backbeat-driven approach of rock with jazz's looser interpretive aesthetic, and whose group Equip' Out demonstrated an even more fervent realignment to the jazz world in later years on albums like Instants (Hux, 2004).

Richard Sinclair had already established himself as a talented bassist, composer and singer with Caravan, especially on its early milestone, In the Land of Grey and Pink (Decca, 1971). With a curiously deadpan delivery, his mellifluous voice was one that never aimed for excess melisma, yet was immediately recognizable. As a bassist, while his playing with Caravan was nothing short of superb, it was with Hatfield that he had the opportunity to really stretch out and prove himself a more sophisticated player, both as a member of the ensemble and as a distinctive soloist.

But in typical Canterbury fashion—the scene so deeply incestuous and, from an archivist's point of view, so interwoven as to make documenting the period an almost insurmountable challenge (though Aymeric Leroy, through his Calyx: The Canterbury Webite and numerous CD liner notes, has become its undisputed expert)—there were some changes in store before the final, classic line-up was cemented into place. Steve Miller left Delivery, to be replaced by Richard Sinclair's cousin Dave (also from Caravan) and a subsequent renaming of the group to Hatfield and the North (taken from road signs out of London, pointing to the A1 motorway). Within months Dave Sinclair left the band for the same reason he'd left Matching Mole—too much emphasis on improvisation— returning to Caravan for a series of classics including For Girls Who Grow Plump in the Night (Decca, 1973) and Caravan and the New Symphonia (Decca, 1974).

Dave Sinclair's ultimate replacement by Stewart was, however, the final piece in the puzzle that would make Hatfield and the North a group which may never have received the appreciation or commercial attention it deserved, but to which time has been extraordinarily kind. With a distinctive complexion that blended stunning solos with compositions from everyone in the group—often joined together to create lengthy, side-long suites that were invariably far greater wholes than the sum of their parts— Hatfield and the North's music remains both of its time and thoroughly timeless. It was and is music that reflected the musical fearlessness and unfettered stylistic cross- pollination of its time, and a cultural personality that kept its distance from the fusion efforts of its American counterparts. Unmistakably British, Hatfield and the North is a group that would have sounded completely different had it emerged a few years earlier or later, and with the same careful treatment from Esoteric's Mark Powell as he applied to other Canterbury releases including the two National Health albums from 1978 that would find Stewart, Miller and Pyle back together again, Esoteric's reissues of both Hatfield and the North and The Rotters Club are unequivocally definitive.

With clearly improved sonics, albeit often more in the nuances and less in- your-face, Esoteric has also collected all the bits and bobs from samplers and singles as bonus tracks on both reissues, including material from the 1975 Virgin label sampler V, the 1976 Chrysalis compilation of live performances from a number of groups at North London's heralded The Rainbow Theatre, Over the Rainbow and Hatfield's posthumous collection, Afters (Virgin, 1980). New liner notes by Sid Smith shed further light onto the group's history. When combined with two recent archival collections of live and radio performances, released by the group through Burning Shed—Hatwise Choice: Archive Recordings 1973-1975, Volume 1 (2005) and Hattitude: Archive Recordings 1973- 1975, Volume 2 (2006)—the full story of Hatfield and the North is now available, in the best possible form.
by John Kelman 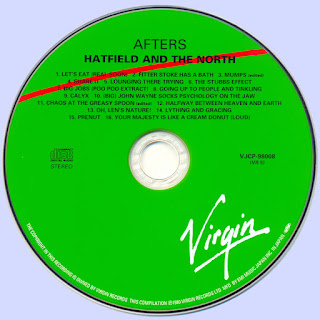 Free Text
Text Host
Posted by Marios at 5:49 AM No comments: