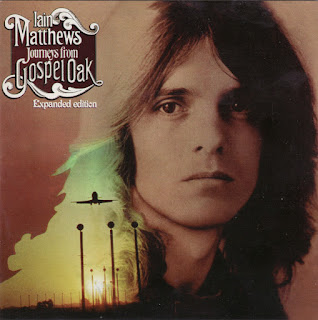 In 1972, several years after leaving both Fairport Convention and his own group, Matthews Southern Comfort, Iain Matthews was once again struck with a case of musical wanderlust and decided to pack in his solo career and form a new group, Plainsong. At the time, Matthews still owed an album to Vertigo Records, and rather than give them Plainsong's debut, he booked a studio for five days and cut a solo album dominated by covers of songs from American tunesmiths, with only two original songs appearing on the set.
By all rights, the album that resulted should have been a tossed-off trifle (especially since Vertigo opted not to release it after all, eventually selling it to the independent Mooncrest label), but Journeys from Gospel Oak turned out to be one of Matthews' most satisfying solo efforts, a lovely fusion of airy country rock and pastoral British folk that captured some of Matthews' most beautiful and heartfelt vocal work. Matthews' two new songs, "Knowing the Game" and "Franklin Avenue," are fine tunes inspired by his experiences in the music business, but the covers he chose for the set are inspired; he manages to bring something fresh and affecting to well-worn numbers like "Do Right Woman" and "Sing Me Back Home," and lesser known compositions like "Bride 1945" and "Things You Gave Me" prove his interpretive instincts were to be reckoned with.
The compact band Matthews put together for the sessions is superb: Jerry Donahue's lead guitar is subtle but gently reinforces the country accents of the melodies, and bassist Pat Donaldson and drummer Timi Donald (who played on many of Richard Thompson's early solo sessions) give the tracks a rock-solid foundation. Journeys from Gospel Oak is a simple album, but there's something deeply satisfying in its elegance, and it captures a soulful and touching spirit that's found in Iain Matthews' best music.
by Mark Deming 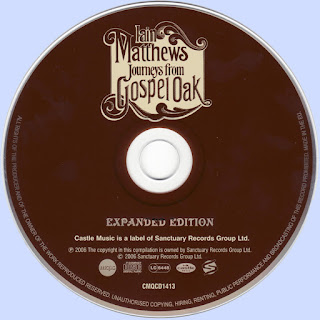 Posted by Marios at 5:02 AM No comments: