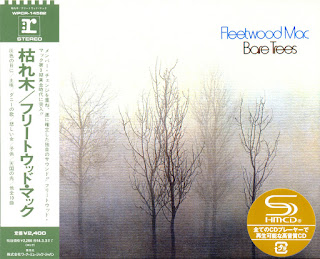 In 1972, Fleetwood Mac's ‘Bare Trees’ was a marked improvement after the releases of "Kiln House" and "Future Games". In fact, several decades later, it still sounds decent.

With Danny Kirwan’s ‘Child Of Mine’ the album starts with best foot forward. Its uplifting mixture of California pop and guitar boogie is easily compared to Delaney & Bonnie, although with a tougher edge. As expected, McVie lays down a solid bassline, never flashy, and Kirwan and Welch indulge in top notch almost Allman Brothers style guitar interplay. Christine McVie’s organ work bubbles just under the surface. You have to ask why the band sounds so vibrant here, when on the preceding album exactly the same line-up sounded lost and tired? Maybe on ‘Future Games’ they’d not found their footing together…

Christine McVie takes the helm for ‘Homeward Bound’, a piano-led pop rock workout with punchy edges. It’s not quite got the finesse of her later songwriting, but here she proves that she’s more than a valuable addition to the band. Bob Welch turns in a great guitar solo, which at the end becomes twin lead with the addition of Kirwan. ‘Spare Me a Little of Your Love’ points further in the direction Christine’s writing would later take the band, with its almost perfect arrangement and plain emotion. ‘Sunny Side of Heaven’ is a gorgeous instrumental piece, with all members putting in top performances – particularly of note is Kirwan’s understated lead work. It would have been so easy for him to overstep the mark and play something flash, but he opts for lyrical soloing, creating a beautiful end result.

‘Bare Trees’ also features less immediate material. ‘Danny’s Chant’ features Kirwan in aggressive mode. At the beginning, he plays a spiky guitar riff through a wah-wah pedal leading into a groove with heavy accompaniment from the rhythm section. With hindsight, I wonder if he’d already begun to feel out of place in the band, with Welch’s material becoming stronger. ‘Dust’ features some nice vocal harmonies, but ultimately, the end result is slight.

‘The Ghost’ is softer, with its slightly jazzy tendencies. A strong chorus shows the potential behind Welch’s songwriting in a way that little of ‘Future Games’ ever did. I often hear an influence from Stephen Stills in Welch’s best work with Fleetwood and this is no exception. His other key number here, ‘Sentimental Lady’ (later re-recorded for his ‘French Kiss’ solo record), is little more than easy listening singer songwriter fare. The title cut offers mid-paced pop that’s fine, but now sounds like the most dated thing the album has to offer. Again, there’s some decent interplay between Welch and Kirwan, so at least it’s got that going for it.

The album closes with a home recording of an old lady reading her own poetry. Apparently Mrs. Scarrott lived near the band’s communal home. I’m not sure why they chose to include it – maybe it was just in keeping with the hippie spirit of the times…or maybe she kept making them jam.

Like most of the albums Fleetwood Mac recorded during the first half of the 70s, ‘Bare Trees’ could never be called classic in the traditional sense, but has more than enough to recommend it.
R. G. Rocks 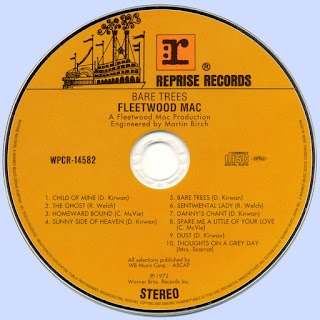