Merrilee Rush And The Turnabouts - Angel Of The Morning (1968 us, wonderful orchestrated sunny psych, 2004 japan remaster) 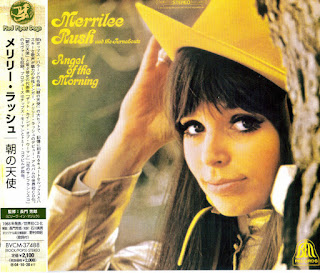 Merrilee Rush was among the most popular homegrown singing stars that the Northwest rock 'n' roll teen scene produced during the mid 1960s. Her trademark low voice and comely looks and an exciting stage presence helped her lead a string of teen combos -- notably the Statics and the Turnabouts -- to regional fame. But then in 1968, after scoring her first of several international radio hits, "Angel of the Morning," she was no longer Seattle's private treasure and the years of major-label record deals, television appearances, and concert touring began.

Born Merrilee Gunst to Reuben and Edith Gunst in Seattle on January 26, 1944, Rush grew up in the the city's north end. Reuben was a home-builder and the family -- eventually including Merrilee's younger siblings Cheryl, Marsha, Laura, and Clayton -- moved at least a few times into new houses he had built. Merrilee attended Lake Forest Park Elementary and began taking piano lessons, then started at Morgan Junior High. By age 13 she was volunteering as a performer in various United Service Organizations (USO) programs entertaining military troops along with a girlfriend named Lynn Vrooman. Then, while a 16-year-old student at Shoreline High School, she agreed to accompany Vrooman to a band audition in Renton. That band was the Amazing Aztecs, led by 18-year-old saxophonist and budding music-biz entrepreneur Neil Rush. As events unfolded, the young bandleader was more impressed by Merrilee and he asked if, in addition to playing piano, she could sing.

A major turning point came in 1965, during the era of Beatlemania, when Merrilee and Neil broke off from the Statics and formed a new group -- one christened with a vaguely Brit-sounding name. Merrilee and the Turnabouts hit the ground running with former Static Dave Erickson managing them and a lineup of Vern Kjellberg (guitar), Terry Gregg (bass), and Ed Leckenby (drums). Best of all, Merrilee was now roaming the stage in her famous candy-striped silk suit, working the crowds and enjoying being no longer stuck back behind her keyboards.

On the night of April 30, 1965, the Turnabouts performed at the Seattle Center Coliseum's Spring Spectacular event organized by Pat O'Day (b. 1934), which also featured fellow Northwest bands Don and the Goodtimes and the Sonics. Headlining were such national radio stars as Johnny Rivers, the Shangri-Las, Dino, Desi and Billy, the Lovin' Spoonful, and the Mamas and the Papas. Then on June 19 the Turnabouts played O'Day's "Teen-Age Fair" at the Seattle Center Exhibition and Display Halls as part of a nine-day event that also featured Top-40 stars like: Lou Christie, Ian Whitcomb, Chubby Checker, and Chris Montez.Neil Rush soon formed a partnership with Lewiston, Idaho, radio DJ Bill Rosencranz, creating a label name based on the beginning letters of their own: RU-RO Records. The Turnabouts' next single, "Party Song"/"It's Alright" (RU-RO 0411) -- recorded by Kearney Barton (1931-2012) in his Audio Recording studios at 2227 Fifth Avenue in downtown Seattle -- made clear that the band's music had now shifted from a deep R&B thing to a post-Beatles rockin' pop focus. And that shift helped propel them into a new status as one of the Northwest's premier dance attractions.

Merrilee and the Turnabouts began a multi-year schedule of grueling one-nighters in towns like Tacoma, Olympia, Montesano, Yakima, Richland, Moses Lake, Ephrata, Walla Walla, Spokane, Corvallis, Salem, Portland, Seaside, Moscow, Lewiston, and Missoula, ad infinitum. And this took a toll, with numerous players dropping away and fresh ones rolling into the lineup. But word about the band was spreading, all the way to California evidently. When the Turnabouts were booked into the Ice House in Glendale, its owner, Bob Stane, enthused, "This is the first time that [the club] has put in a headline act without an audition or hit record" and that he'd hired them due to their "spectacular reputation in the Northwest" (The Beat).

As 1967's "Summer of Love" unfolded and the counterculture flowered, the Turnabouts began playing to a different kind of audience, at a different kind of gig that would be promoted via psychedelic art posters. Opportunities were arising to perform shows at various auditoriums replete with hippie dancers and mind-bending light shows projected on the stage. The band did one in Tacoma on August 26 at the Charles Wright Academy and in October appeared in Seattle with the Wallflowers and the Gas Company at The Happening at 1426 First Avenue.

Meanwhile the Statics' former roadie, Jimmy Johnson, had gone on to work for the Raiders. Lore maintains that it was he who kept reminding Revere about how great Merrilee Rush was. An offer to tour the deep South with the Raiders resulted -- only Merrilee would be supported by a backing band known as the Board of Directors. The musicians traveled by bus caravan playing many concerts in places like Florida, Alabama, Tennessee, finally ending in Louisville, Kentucky. It was while in North Memphis, Tennessee, that Rush was invited to attend a recording session where the Raiders were cutting their next album, Goin' to Memphis, at American Sound Studio. After meeting the studio's owner, veteran hit producer Chips Moman, she was asked to cut some demonstration tracks. Moman was pleased and invited her to return in a few weeks, when she would ultimately be paired with producer/musician Tommy Cogbill (1932-1982) and various other members of the ace house band, The Memphis Boys.

One song offered to her was "Angel of the Morning," penned by a hit-writing ace, Chip Taylor. Rush loved it. The musical hooks were great, and the lyrics -- about a woman offering a lover assurance that he need not linger around if it wasn't in his heart to do so -- were compelling and cutting-edge socially. In January 1968 Rush was back in Seattle, and soon thereafter the song was released by the New York-based Bell label. By March Seattle's KJR had jumped on the record, Spokane's KJRB followed, then Portland, San Francisco, Los Angeles, and on and on. In May "Angel of the Morning" broke out in Billboard magazine's Hot-100 charts, climbing for 16 weeks, and finally peaking at the No. 7 slot.

"Angel of the Morning," with its beautiful melody, accessible chords, moderate tempo, light martial snare fill, intriguing lyrics, and Rush's unique harmonious vocals, rightfully became a giant hit through that hot summer of 1968. Its prime period on the charts overlapped a troubling season spanning the assassinations of Dr. Martin Luther King and Robert F. Kennedy and the riotous Democratic National Convention in Chicago. Surrounded on the charts, as it was, by such heavy tunes as Steppenwolf's "Born to Be Wild" and the Rolling Stones' "Street Fighting Man," it felt like an aural oasis of needed calm. The right song for the right moment.
by Peter Blecha, 12/14/2015 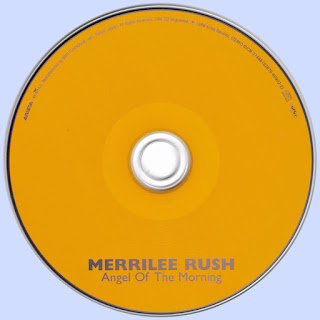