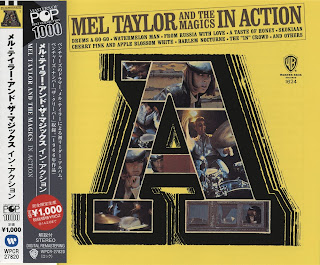 A great little album of 60s instrumentals – played by a small guitar-heavy group led by drummer Mel Taylor, who's got a really heavy driving sound! The notes say that Taylor has been featured on hundreds of records during the 60s – and given that his sound here is a lot like Hal Blaine on some of Blaine's instrumental albums from the time, we're almost wondering if Taylor's not a name-de-date for Blaine. This is just speculation, though – but the sound of the record is great if you dig Blaine's rocking instrumental albums from the same time. Titles include "Watermelon Man", "Bullseye", "Bongo Rock", "Skokiaan", "The Creeper", "A Taste Of Honey", "Drums A Go Go", "No Exit" and more.

Mel Taylor was born in Brooklyn, New York, on September 24, 1933, the first child of Grace and Lawrence Taylor. His mother"s family was Russian/Eastern European Jewish, and his father"s family was from the Tennessee/North Carolina area, with English, German, Dutch and Cherokee roots. His early years were spent in Brooklyn but, in the summer of 1939, his father took him back to the family home in Johnson City, TN, for the first of many visits. His father, grandfather and uncles all played guitar or banjo, and Mel became used to music being an integral part of his life. Back in New York, he joined the Police Athletic League and excelled in the 100-yard dash. He also developed a lifelong passion for the Dodgers baseball team.

Mel"s interest in the drums began early, too. His mother remembered him banging on pots and pans with knitting needles, then drumsticks. In school, he joined the drum and bugle corps, and marched in the Macy"s parade. His inspiration came from big bands and especially Gene Krupa, whom he heard on the radio and whose style he began to copy.

In his early teens, Mel moved permanently to Tennessee where he attended high school. After trying out for the football team, he found he preferred marching in the band instead. He joined the Navy at the age of 17 and, after basic training in the Great Lakes region, was posted to Pensacola where he was assigned to a crash crew for the Navy pilots" training facility.

After leaving the Navy, Mel returned to Tennessee where he started playing music on local radio and TV shows. His younger brother, Larry Taylor (later bass player with Canned Heat), remembers that Mel played rhythm guitar and sang back-up on a rockabilly TV show in Johnson City with Eddie Skelton. He later played drums with Joe Franklin"s group, and even appeared on the Ed Sullivan Show -- or rather his arm did, as that was all anyone could see of him when the show aired! He also played guitar and sang on his own (very) early morning radio show, as "Mel Taylor and the Twilight Ramblers".

Mel moved his family, including 4 small children, out to California in 1958. During the day, Mel worked LA Grand Central Market, as a meat cutter – a trade he had learned in Tennessee. By night however, he played drums in clubs around the L.A. area and became quite sought after. Soon he was able to quit his day job, and graduate to session work in the recording studios. His early credits include "The Monster Mash" with Bobby "Boris" Pickett, "The Lonely Bull" with Herb Alpert and the Tijuana Brass (for which he was paid $10!), various cuts with Buck Owens, and many more. He also became house drummer at the famous Palomino Club in North Hollywood.

In the late 1950"s and early 1960"s everyone in the music business frequented the Palomino – and often sat in with the house band, so Mel had the opportunity to meet and play with many hit artists. One night in 1962, The Ventures came to the Palomino after doing a TV show in Hollywood, but without their drummer, so Mel obliged and played "Walk Don"t Run" with the group. Later, The Ventures asked him if he would be interested in joining them, as their original drummer was unable to travel. Shortly thereafter, they called Mel in to do some recording and, a few months later, to go on the road with them. From 1963 on, Mel became known as The Ventures" drummer, recording and performing with them for more than 32 years, traveling all over the US, to Europe and to Japan, where The Ventures" annual tour is considered a major cultural event.

In July 1996, while on tour in Japan with The Ventures, Mel was diagnosed with pneumonia, but subsequently a malignant tumor was found in his lungs. He continued to play until August 1, so that a replacement drummer could be found for the balance of the tour. On August 2, Mel returned to Los Angeles for further testing but the cancer was so fast-moving that, after less than 10 days at home, he died very suddenly on August 11. He leaves a legacy of hundreds of recordings that continue to be enjoyed by millions of fans.
The Ventures 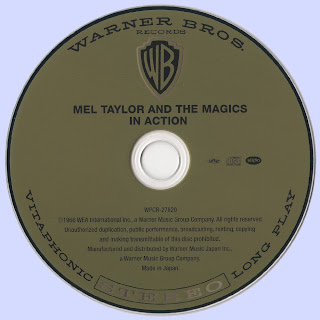