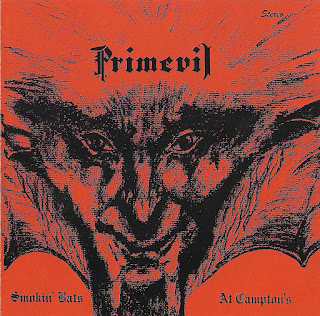 Indianapolis based, Primevil's only album, Smokin' Bats at Campton's (Dave Campton being their lead singer; "bats" being, well, you know), was originally recorded in 1974, but only found its way onto CD some 20 years later. Now, the record is frequently cited as a bona fide stoner rock touchstone (whether anyone could find a copy to be influenced by or not, in the interim), and its eight cuts run a wide gamut featuring surprisingly refined songcraft and impressive musicianship, as well as semi-improvised efforts and unfocused jam waffling.
The best qualities among these are all exemplified within the opening trio set off by the standout "Leavin'," with its acoustic passages and stop-start riffs, the hard-driving "Progress," with its funky bass, wailing harp and twin guitar midsection, and the instrumental six-string showcase "Fantasies," which recalls Fly by Night-era Rush, but was in fact recorded one year earlier. On the other hand, forgettable rockers like "Pretty Woman" and "Tell Me If You Can" don't fare nearly as well, stumbling on some truly awful lyrics from Campton amid their boring, sub-Cactus-like thud. Likewise, the white-knuckled romp, "Hey Lover," was allegedly whipped together in one night -- and sounds like it, but at least it possesses a certain rough charm à la Sir Lord Baltimore.
Back on firmer ground, the memorable "High Steppin' Stomper" actually shows traces of glam rock (must be that hand-clapping and boot-stomping), but then the closing "Your Blues" screws it up again by offering nothing but -- you guessed it -- lazy blues jams, serving no foreseeable purpose aside from framing some searing lead guitar flights, and acting as album filler. Even with all of these inconsistencies, though, Smokin' Bats at Campton's is a true relic that's still well worth excavating by stoner rock enthusiasts, who are bound to enjoy its sporadic triumphs as much as they'll be captivated by its modest D.I.Y. origins.
by Eduardo Rivadavia 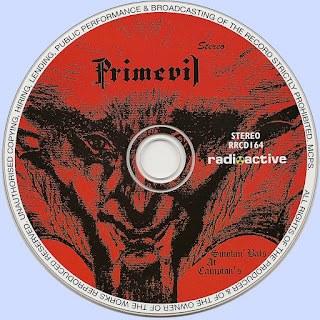