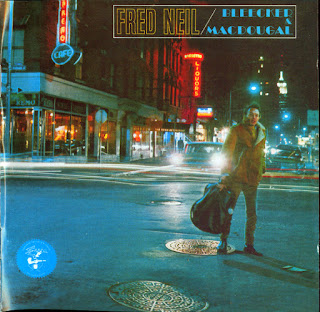 Fred Neil's first album for Elektra, 1964's Tear Down the Walls, had established him as a folk-blues troubadour unmatched in his appetite for eclecticism. That album had been done as a part of a duo with the more conventional folk singer Vince Martin, their partnership ending before a planned live follow-up LP at the Bitter End in Greenwich Village could be realized. Bleecker and MacDougal, released in May 1965, gave Neil more room to spread his wings. Where half of Tear Down the Walls had been folk covers, now Fred could write virtually all of the material. He could also take all the vocal leads, which he'd only occasionally been able to do on Tear Down the Walls, where he had often harmonized with Martin (who took the occasional lead vocal of his own on that LP).

As on the prior record, session men John Sebastian (on harmonica) and Felix Pappalardi (on bass) would be vital to fleshing out Neil's songs with arrangements unusually deep and powerfully rhythmic for folk albums of the period. On Bleecker and MacDougal, they were augmented by Pete Childs on second guitar and dobro, as well as Douglas Hatelid (the real name of the Modern Folk Quartet's Chip Douglas) on bass. On top of all that, some of the guitar was electric, though applied with sparse dabs. No one may have realized it, but in the process they were helping to forge an entirely new direction in contemporary music, folk-rock.

"The Vince and Fred music was more related to commercial folk music, just by virtue of what you have when you put two singers and two guitarists together," says Sebastian. "Once Fred was sort of on his own on a record, what would naturally come out would be more of the Southern musical hybrid. Whether he was doing it consciously or not, I can't say.

"Whatever we were calling it, it definitely had the qualities of rock'n'roll. But the styles were always just this side of rock'n'roll. He was a great rhythm guitarist, but he had very little inclination to use an electric. I think that was a wise choice, because that twelve-string [had] a certain kind of a propulsion you probably couldn't get out of an electric instrument. He had no objection to anybody playing an electric guitar accompanying him, but there are certainly both acoustic and electric guitarists accompanying him in the various recordings, including the [post-Elektra] Capitol stuff." (Which, incidentally, is found on yet another batch of Neil material reissued by Collectors' Choice, The Many Sides of Fred Neil.)

Neil summoned an extraordinarily strong set of material for Bleecker and MacDougal, rivaled only by his first Capitol album, Fred Neil, in consistently high quality. Fred had by this time perfected the unique persona of the bemused folk-bluesman. His sumptuous low voice sounded as lived-in as an all-night diner on the corner of Bleecker and MacDougal, the epicenter of the Greenwich Village folk scene, where he posed for the cover's memorable nighttime shot. That cover could have been the illustration for the opening lyric of the title cut that kicked off the album, where Neil found himself "standing on the corner of Bleecker and MacDougal, wondering which way to go." Unlike many a bluesman, however, Neil was not so much outraged or discouraged by life's setbacks as cheerily resigned to them. He was just a country boy, it seemed, bending with the hard knocks that a big city such as New York was bound to deliver. Either he could retreat to his woman in Coconut Grove in Southern Florida when the Village got too much, as he did on "Bleecker and MacDougal," or he could find contentment in a more philosophical, psychological space.

Nowhere were those ethos evoked more effectively than in the record's most famous song, "Other Side of This Life." Neil's most famous composition other than "Everybody's Talking," it attracted cover versions by Peter, Paul & Mary, the Lovin' Spoonful, the Youngbloods, and, most famously, the Jefferson Airplane, who made it a centerpiece of their live concerts. Also covered to good effect was the record's most delicate, melodic cut, "Little Bit of Rain," with its watery reverberating guitar. Linda Ronstadt sang it on the 1967 debut album by the Stone Poneys, and it was also recorded, albeit in an unreleased version, by top British folk-rock singer Sandy Denny.

Other highlights of the record included "Blues on the Ceiling," where Neil's blues were at their weariest and most fatalistic, though somehow they never quite made either him or the listener downright depressed. "Candy Man" reworked a song had originally been done as a B-side for Roy Orbison's "Crying," though Orbison managed to get his interpretation into the Top Thirty under its own steam. "Mississippi Train" rocked harder than anything else on what was still for the most part an acoustic record, showing he could convincingly handle uptempo blues as well as the more downbeat folk-blues he usually favored. So did "Country Boy," another tune that reinforced his image as a man ill at ease in the big bad city.

Neil's genre-blending and songwriting were extremely influential on the musicians that were about to break folk-rock wide open, as Sebastian soon did in the Lovin' Spoonful. Sebastian's own composing, he acknowledges, was influenced by "the natural way [Fred] could combine these various styles just by being who he was. It wasn't any kind of an alchemy thing of 'we're gonna pour a little of this, and a little of that.' That was very inspiring. It was also a real lesson in how to let a lyric sound like it just fell out of your mouth, like you hadn't really labored over it. Fred always had that quality about his songs. As a songwriter, at that time [when Sebastian and Neil were playing together], I maybe had written two songs. But I certainly was taking note of how effortless these songs sounded.

"As a matter of fact, in later years, I began to get a little critical about them. And say, 'Jesus Christ, you had this genius two verses, why didn't you write the third verse, for god's sake?' That was the only place that I could actually say I had any influence on Fred. Occasionally I did get up the nerve to say, 'Gee, we're kind of going back to this first verse faster than I really feel like doing it. Couldn't we have another verse, Fred?' That was part of the pincer movement that Felix and I were helping to apply, sort of on Paul Rothchild's behalf." As it turned out it would be the last album that Rothchild and Elektra worked on with Neil, yet one that endures as one the greatest of all New York folk-based singer-songwriter efforts from the 1960s.
by Richie Unterberger 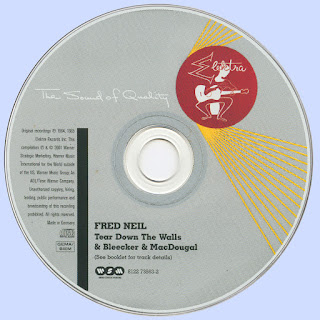 Free Text
Text Host
Posted by Marios at 8:36 AM 3 comments: