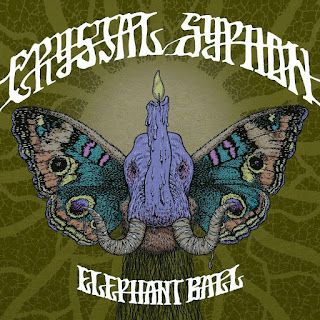 For decades, Merced, California’s Crystal Syphon were lost amongst the psychedelic lettering that graced the dayglo posters of the Fillmore and Avalon – just a mere opener on the heaviest of bills and a footnote in the countless tomes written about the Haight Ashbury music scene. That all changed in 2012 when Roaratorio Records released Family Evil a highly praised collection of studio and live cuts that proved there was still pure California gold to be mined. The deposit was not depleted and Roaratorio is back with a second compilation, Elephant Ball, of smokin’ early 1967 studio demos and a live November 1969 gig from the legendary Fillmore West.

Side one opens with the all too brief “Dawn Sermon”, whose jingle jangle will make the biggest Quicksilver Messenger Service and Byrds’ fans sweat what is missing after the one minute and twenty second mark. No need to fret, as the sweet yet dark vocal harmonies of “For All of My Life” and “Tell Her For Me” – paired with Jim Sander’s fuzzed minor key leads – move at a blinding lysergic pace as they slip into a live portion of the album. Featuring the last incarnation of the group, the title track begins with an eccentric percussion and bass jam unleashing a frenzy of swirling organ fills and crunchy riffs that pummel the listener like a herd of wild pachyderms. As the audience outwills the abrasive attack the band barrels at a break neck speed into “It’s Winter”.

Closing with the Latin-tinged “There is Light There”, this release is further proof Crystal Syphon were an incendiary live group whose name should be mentioned in the same breath as other underappreciated Nor Cal luminaries (see: Kak, The New Tweedy Bros and Country Weather) while also being held in the highest esteem of the Quicksilvers, Airplanes and Grateful Deads who went on to find major label success.
by D. Norsen 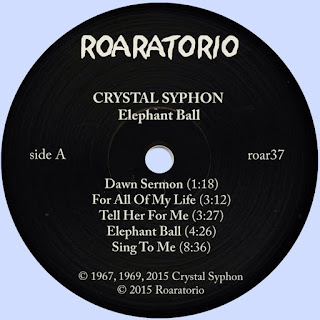 Free Text
Text Host
Posted by Marios at 9:08 AM No comments: