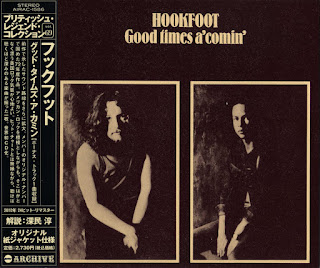 The name Hookfoot sounds as generic as Bulldog, Sweathog, and other pedestrian 1970s monikers, and the music on the group's second release, Good Times a' Comin', reflects just that. It's Elton John sessionmen -- Caleb Quaye, Dave Glover, and Roger Pope from Tumbleweed Connection and other John discs -- recording their Dick James-published songs which were produced at Dick James Studios and going for the brass ring on their own with feeble results. The a cappella ending to "Living in the City" shows they have vocal as well as instrumental chops, while "Gunner Webb's Changes" lifts musical passages right out of Crosby, Stills, Nash & Young's "Long Time Gone" and "Almost Cut My Hair." That should come as no surprise since they covered both Stephen Stills and Neil Young on their self-titled debut from 1971.

Lead guitarist Caleb Quaye writes or co-writes nine of the ten titles, vocalist Ian Duck is the runner up with six, but with titles like "Sweet Sweet Funky Music," "Slick's Blues for Jumbo," and "Flying in the U.S.A.," it's obvious the creativity of Bernie Taupin or Elton John is missing from this effort. The blues-oriented grooves are all solid and played with precision, but they also fail to excite. Some of it comes off like Savoy Brown without any bite. Why they didn't raid the Dick James vaults for a hit or ask their friends John and Taupin to throw them a hook is the real mystery of Hookfoot. It's an elaborate package, with a gatefold containing the lyrics and classy photos, but these aren't what one would classify as songs to be sold to other artists. "Look to Your Churches" sounds inspired by Traffic and the Band, but not up to those artists' standards.

Sometimes sidemen are supposed to be just that, lending their ability to translate a performer's ideas -- to help put the crowd into a frenzy; one can't see Elton John performing the title track, "Good Times a' Comin'," despite Ian Duck and Caleb Quaye generating interesting moments with their guitar duel. It seems none of John's magic rubbed off on the pair's songwriting chops. Still, had England's pianoman made an appearance on this record, it would have made a world of difference. This same year, Hookfoot's American counterparts -- Danny Kootch, Russ Kunkel, and Leland Sklar -- released the first of three albums under the name the Section. What it proves is that without an Elton John, Carole King, or James Taylor, these records end up sounding like instruments playing themselves. A wonderful argument for the value of charisma and the vacuum of space without a star to fill it with light.
by Joe Viglione 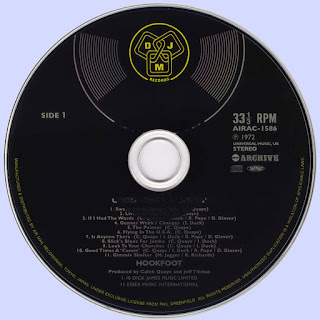 Free Text
the Free Text
Posted by Marios at 5:00 PM No comments: