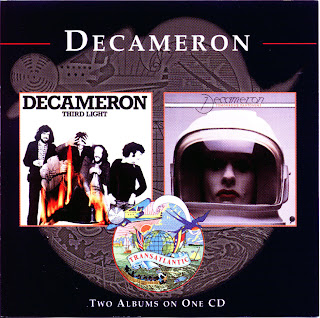 By 1974, and the release of our second LP Mammoth Special, Decameron had established itself as a very popular live contemporary folk band with regular tours of the UK, Holland, Belgium and Germany. A follow-up album Beyond The Days was recorded for the Mooncrest label but never released.

However manager Sandy Roberton then signed the band to Transatlantic Records and the album was re-worked in March 1975 with producer Tom Allom. Dave Bell remembers being on holiday in Cornwall when the band got a phone call saying the LP was to be released in September and they needed a new title. Dave said "Call it Third Light and set fire to it – the cover not the album!".

Third Light is still considered by the band and many of our fans to be our best album. It received a number of great reviews in the press and the Sunday Times critic Derek Jewell included it in his Top Ten albums of 1975. Many of the lyrics have been misconstrued over the years, but I consider that songs like Trapeze', "The Ungodly” and 'Journey's End' are some of the finest that Dave and I wrote together.

The album was promoted with tours of Holland and Belgium and a major UK tour in the autumn of 1975. Drummer Bob Critchley had joined the band and our single 'New Girl In School', released under the name of our alter ego, The Magnificent Mercury Brothers, had received a lot of airplay. Our fourth and final LP Tomorrow's Pantomime was recorded in April 1976, just a few months before we performed our final gig at Southsea on the 4th July.

I remember the album being recorded in a hurry and under a cloud of uncertainty about the future, but I still think it includes some of our strongest material. The title track was written on a terrible ferry crossing from Gothenburg to Amsterdam, while 'The Shadows On The Stairs' was finished on tour in Germany. 'So This Is God's Country' and 'Peace With Honour' were written in the wake of Nixon and Vietnam, and partly based on my brief experience of living in America a few years earlier.
by Johnny Coppin, June 1997

Transatlantic released the follow- up Tomorrow's Pantomime in 1976 by which time the band had added drummer Bob Critchley. Seven of the ten songs from Tomorrow's Pantomime are included in this CD re-issue. Johnny Coppin now has a successful solo career as a singer-songwriter, having released several albums such as Force Of The River and A Country Christmas on his own label, Red Sky Records.

Dave Bell still writes songs and together with Al Fenn can still recall amazing details of Decameron's gigs. Dik Cadbury plays in various bands and has a phenomenal memory for all the band's vocal harmonies, while Geoff March, now a tree consultant and part-time cello player, admits to remembering very little! Decameron's music still lives on and in recent years they have re-united for a few-special one-off concerts. This is the first time these two albums have been re-issued on CD.
by Laurence Aston 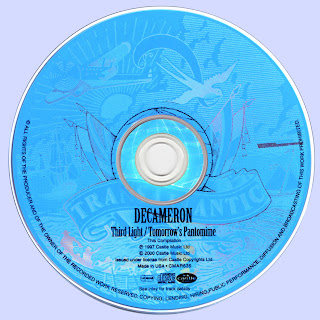 Free Text
Text Host
Posted by Marios at 8:13 AM 4 comments: