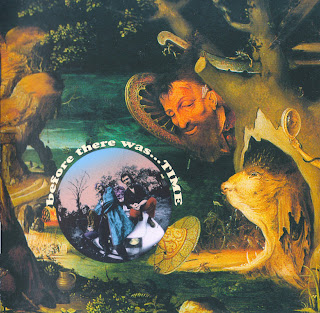 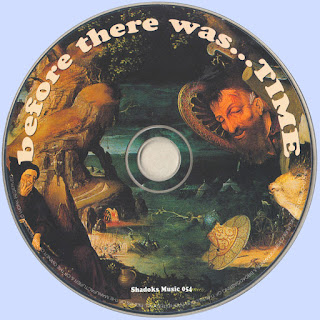 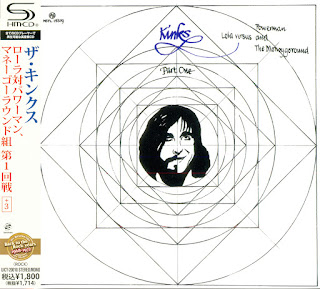 By the time Ray Davies wrote the songs that made up Lola Versus Powerman And The Moneygoround Part One, it was as if he couldn’t stop himself thinking in broader, conceptual terms. His muse seemed to take an idea and run so far with it that song after song poured forth on a particular theme – an expansion process paralleled by the way his band’s LP titles had grown into mission statements: The Kinks Are the Village Green Preservation Society, followed by Arthur (Or The Decline And Fall Of The British Empire).

Disgruntled by the comparatively poor sales of those albums, and by the way that the Arthur TV pop-opera project had been held up so long by business problems (before being cancelled) that The Who’s Tommy leapfrogged it to be hailed as the first “rock opera”, Davies’ new batch of material was driven by disaffection with the music business. While not exactly an opera, it loosely follows the callow newcomers of “The Contenders” as they contend with publishers, agents and the industry’s arcane accounting system, before ultimately taking solace, on “Got To Be Free”, in personal freedom and ethical purity, by opting to “stand up straight, let everybody see I ain’t nobody’s slave”.

It’s a journey mapped out across varied musical terrain, from the good-timey jugband feel of publishers’ domain “Denmark Street”, through the music-hall mock-jollity of “The Moneygoround” – still the most acidly accurate summation of showbiz financial finagling – to the chunky riffing of “Powerman”, the eventual realisation of the gulf separating artists from businessmen. While the album was being recorded, keyboardist John Gosling was added to the band lineup, and his piano and organ bring depth and texture to songs like “Get Back In Line”, a session-man’s plaint at the power wielded over his career by the Musician’s Union, and “Top Of The Pops”.

The latter, ostensibly a celebration of how “life is so easy when your record’s hot”, is cunningly undercut by a darker tone. The

very riff itself seems drenched in cynical disillusion, while the concluding churchy organ greeting the agent’s declaration, “Your record’s just got to number one – and you know what this means?/It means you can make some real money!”, sounds like a bitter revelation.

Short and sweet, “The Moneygoround” packs more useful information into two minutes than a course of seminars about how industry types carve their undeserved percentages from a writer’s income, seasoning reality with regret (“I thought they were my friends… I can’t believe I was so green”). The album’s two hit singles, though, were only tangentially connected to the album concept. One of the most accomplished examples of Davies’ witty wordplay, the gender-bender tale “Lola” was set to a tangy timbre of unison National steel and Martin acoustic guitars, fattened with piano, maracas and classic Kinks guitar/bass/drums chug. Ironically, in view of the lyric change required to get BBC airplay, one of the outtakes included here finds Davies singing not “C-O-L-A, cola”, but “I hate Coca-Cola” – though whether that would have circumvented the Beeb’s prohibition on advertising remains doubtful.

Adding tack piano to the National steel for another distinctive timbre, “Apeman” again showcases Davies’ neatly crafted lyricism, while its theme of hankering after a simpler, prelapsarian state is taken up in songs written for the following year’s film soundtrack Percy, paired here with Lola Versus Powerman…. “God’s Children” boasts a similar back-to-the-garden sentiment as “Apeman”, but not as amusingly, its blend of piano, strings and ringing guitar arpeggios irresistibly recalling The Byrds of “Turn Turn Turn”. But the standout track is the beautiful, melancholy ballad “The Way Love Used To Be”, which again finds the narrator wistfully hankering after lost innocence. Elsewhere, “Completely” is a slow blues boogie instrumental in Fleetwood Mac style, and “Dreams” an escapist fantasy, while “Just Friends” employs harpsichord and strings behind Davies’ caricature British croon.

Among the various alternative versions and remixes, the only actual Lola… outtakes are “Anytime”, a maudlin reassurance of support in plodding “Hey Jude” manner, and the swaggering, Bolan-esque boogie “The Good Life”, with promises of “wine, women and song, if you sign on the dotted line”. In this context, its concluding message that “if this is civilisation, I’d rather be uncivilised” offers another link cementing the anti-modernist spirit linking these two undervalued entries in the Kinks Kanon.
by Andy Gill 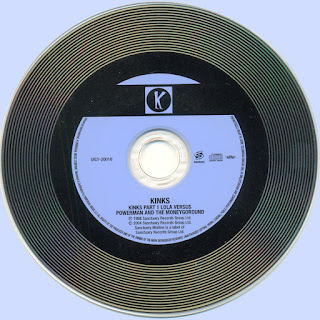 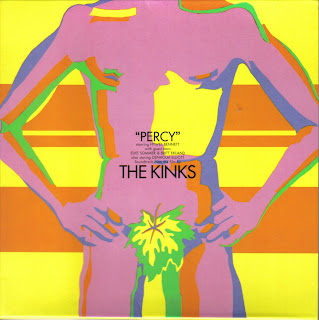 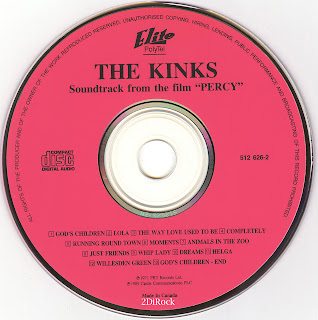 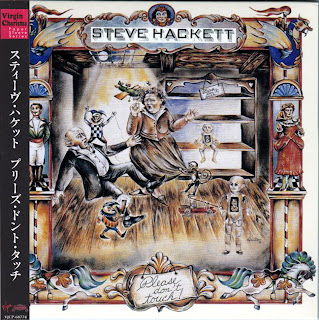 "Please Don't Touch" - is the second solo album by English guitarist Steve Hackett, and his first after leaving Genesis in June 1977 (following the tour that would be documented on Seconds Out), and started his solo career

Unlike the debut album "Voyage of the Acolyte", which was a largely instrumental concept album steeped in the progressive rock idiom, this record is primarily a collection of songs featuring guest vocalists Richie Havens, Randy Crawford, and Kansas' Steve Walsh (their Phil Ehart also chips in here on drums). Although the sum effect is something of a patchwork, the individual pieces are often lovely.

Over his career, Hackett has shown a propensity for extremes, in this case letting the jazzy and sentimental "Hoping Love Will Last" segue into the musical maelstrom of "Land of a Thousand Autumns" and "Please Don't Touch" (which will delight fans of Hackett's first record, although the Caroline CD inexplicably pauses too long between the two). In a nod to King Crimson (specifically Lizard), the title track is quickly cut off with the quirky carousel sounds of "The Voice of Necam," which itself dissolves into a mix of airy voices and acoustic guitar.

The best tracks belong to Richie Havens: "How Can I?" ("Hackett"'s take on Peter Gabriel's "Solsbury Hill") and the conclusive "Icarus Ascending." Hackett is no singer, so he wisely masks his voice in a "laughing gnome" effect on the delightful "Carry on Up the Vicarage" and hides behind Walsh's lead on "Narnia" and "Racing in A." Perhaps taking his cue from Gabriel (whose debut had appeared in 1977), Hackett seems eager to show his range as a songwriter. While he clearly has a closet full of good ideas and a genuine knack for interesting arrangements, Hackett is too much the eccentric Englishman to appeal to broad commercial tastes. Please Don't Touch remains a uniquely effective amalgam of progressive rock and pop; like his first album, he never made another one quite like it, perhaps because he again taps the concept's full potential here...

"Please Don't Touch" contains a myriad of musical styles that many were either rejected or never put in front of the "democratic process" which Genesis was known for, which also was amongst one of the reasons that Steve would leave the band. This album, of the many he had released, had finally shown the compositional side of Steve's talent and would prove how valuable his contributions to Genesis were. Rumour has it that the title track was rehearsed and but later rejected by Genesis, when drummer Phil Collins said that he "could not get into it".

Another excellent Hackett masterpiece. The music on this CD is diverse and yet may be the most accessible of his early recordings. There are guest vocalists on many tracks, which is a plus. The songs are shorter than usual but pack everything from folk ballads to classical guitar."Narnia" features Kansas vocalist Steve Walsh, and is based on C.S. Lewis' books. This is a great tune, very upbeat, with an excellent performance by Walsh; it's catchy enough to have been a radio tune. "Carry On Up the Vicarage" opens with a toy piano and sound effects with Christmas songs being sung; the music is very eclectic, with the vocal having a childlike effect in one ear and a deep vocal in the other."Racing in A" again features Walsh with another excellent performance that is heavy rock with some nice mellotron work, again upbeat, a lot of stop and start at the end."Kim" is a classical guitar piece with flute."How Can I" features the unlikely pairing of Hackett and Ritchie Havens; it's an acoustic guitar piece with Havens on vocals.

I really like Havens' singing here."Hoping Love Will Last" is a piano vocal piece, a ballad, and has kind of a R&B feel. Very different from anything he has done before or since for that matter, but a very pretty song, that ends up very well-orchestrated."Land of a Thousand Autumns" and "Please Don't Touch" share the same theme for the most part, the first being atmospheric, and the latter is an in your face instrumental with very powerful guitar, bass pedals, keyboards and sound effects."The Voice of Necam" again uses the theme of the prior, played on a creepy sounding organ again with sound effects, music expands with voice effects and acoustic guitar. "Icarus Ascending" features Havens on vocals, very dramatic and dark at times, lush instrumentally, end is very eclectic with short sections of reggae, jazz, and lots of guitar effects.
by Adamus 67 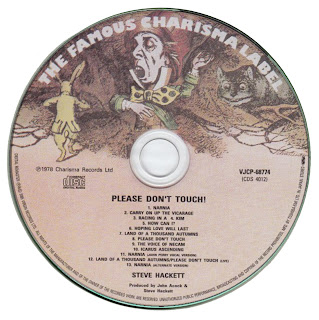 Free Text
﻿the Free Text
Posted by Marios at 9:29 AM 4 comments: