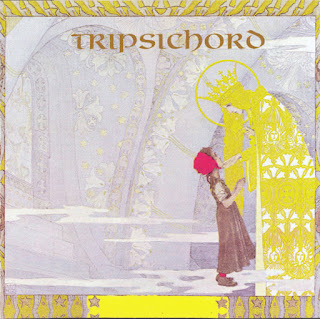 This notorious San Fransisco group is known to have toured in the late 60’s/early 70’s as “the fake Moby Grape” – a marketing scam created by the evil Matthew Katz, who himself was trying to capitalize on the legendary Grape’s short-lived success.
Tripsichord (also referred to as the Tripsichord Music Box) was actually a fine band, a real group too, who would go on to release a very good album in 1970.  Prior to their sole album (a Janus label release), the group recorded material for Katz that ended up on the Fifth Pipe Dream compilation.  These cuts are solid SF acid rock – heavy on intensity and dark aura, brooding harmony vocals and great guitar work.
Their only LP release is a midpoint between the psych sounds of early Quicksilver Messenger Service and Moby Grape’s shorter, more concise material – psych influenced rural rock/folk rock with plenty of stoned ruminations and lots of melodic guitar work – the classic SF sound.  Regarding the Tripsichord album, Fuzz, Acid & Flower’s Clark Faville added, “their self-titled album (recorded in 1969) proves conclusively that they alone carried the torch during that year that was once shared by Quicksilver Messenger Service, Frumious Bandersnatch and Moby Grape. The Tripsichord album is essentially what the world was hoping Shady Grove would be! The record is an embarrassing wealth of riches both musically and in its dark and menacing lyrical imagery. The dual guitar interplay on this under-rated gem is as good as anything by the three groups mentioned and has stood the test of time well.”   If the album has a weak spot, it’s “Short Order Steward,” a boring blues jam that’s nearly rescued by fine guitar soloing.
The remaining cuts are excellent.  “Fly Baby” and “Black Door” are two of the better unknown SF psych cuts (Fly Baby features great tribal rhythms) while the album’s last cut, “Everlasting Joy,” lifts off with inspired guitar leads.  Other gems are the relaxed country rock of  “We Have Passed On” and the mystical musings of “Narrow Way.”  If you’re interested in hearing this unsung band’s music, the Akarma reissue is probably the best bet.  Besides including the album in its entirety, this disc also features the Fifth Pipe Dream tracks along with Tripsichord’s two 45s.  A very classy reissue with lots of great music.
by Jason Nardelli 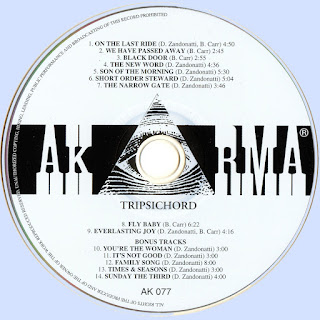