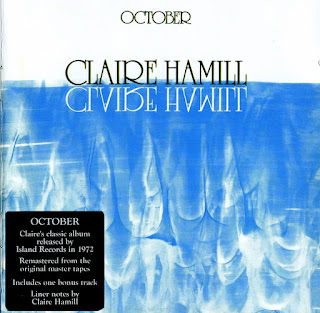 Claire Hamill was a direct contemporary and label-mate of the late, but increasingly mythical, Nick Drake. Her second solo outing, October, proved her the mistress of tender bedsitter missives that still can haunt the heart. Fans of confessional songwriting should value and explore this neglected selection of artistry and craft that has stood the test of many passing seasons.

Recorded by Cat Stevens maestro Paul Samwell Smith in the month of 1972 that lends its name to the proceedings, it retains echoes of Joni Mitchell and Linda Thompson. Hamill possessed a maturity that reached far beyond the eighteen years her life had encompassed by the time the record appeared. In its evocative shots of her by Lord Lichfield, she seems a wayward Alice, gazing from rain-streaked panes or kicking up a cloak of bronzed Autumn leaves.

A small pearl of wintry perfection, October holds songs that pull with gentle strength on the strings of the heart, since she possess a voice of tremendous assurance and clarity. By turns piano-led, guitar driven, or beautifully coated in strings, she extols a wistful longing that lingers like an evocation.

Hamill went on to record two superlative albums for the Kinks Ray Davies's short-lived Konk Records before briefly joining Wishbone Ash. Her work throughout the '80s became more experimental and choral, though her recent outings hold more in common with the tone and texture of her Island years. One of the most alluring fantasy pairings would have been Claire Hamill and Nick Drake. Everything was almost there, the talent, a shared sensibility, mouthfuls of reflective and haunting songs, even the same record label. It wasn't to be; it seems they never even met.

The best dreams are the ones that hover just out of reach, beautiful but unsullied by the sad light of what we commonly know as the real world.
by Robert Cochrane 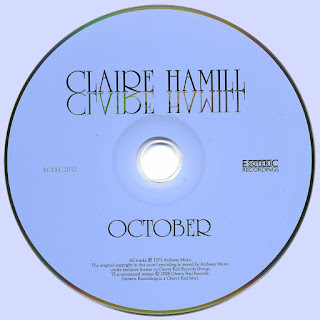 Free Text
Text Host
Posted by Marios at 10:36 AM 5 comments: