The Marshall Tucker Band - Where We All Belong (1974 us, outstanding southern blues jam rock, 2004 remaster with bonus track) 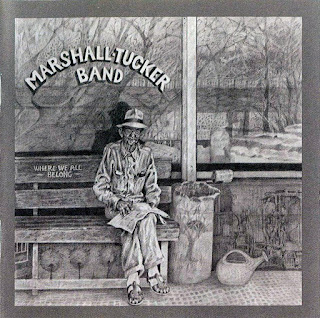 Side one kicks off with what would go on to become one of Toy Caldwell’s most recognizable guitar licks, the intro riff to “This Ol’ Cowboy.” Written and sung on record by Toy, the song would later be performed in concert by Doug.  A Top 40 hit for the band, the song remains a Tuckerhead favorite. Next comes “Low Down Ways,” another great Toy composition that leads into “In My Own Way,” a classic country song featuring some of Toy’s excellent pedal steel guitar. Paul Hornsby contributes some fine keyboard work on this track and several others, adding to his already impressive job as producer.

Side two begins with "How Can I Slow Down and moves into one of their 1970's concert staples "Where a Country Boy Belongs."  The studio version is enhanced by a guest appearance by Elvin Bishop, burning up on his slide guitar.  And speaking of guests, brother Charlie Daniels is all over the record, both in the studio and on the live sides, "sawing that fiddle and makin' it hot."

"Now She's Gone is the only track on the studio record not written by Toy.  Well, not entirely anyway.  It was co-written by his brother, Tommy.  Singer Doug Gray outdoes himself on the closing track "Try One More Time", a country blues number that drips with soul. Side three is the first of the live side, recorded at The Performing Arts Center in Milwaukee, Wisconsin.  The set begins with the intense "Ramblin", which rocks like a San Francisco earthquake, and then moves into the 13-minute plus live version of "24 Hours at a Time", featuring  solos from everyone in the band and Charlie Daniels.  Tommy's bass solo will live forever, and most Tucker fans as well as most fans of good southern music can hum the notes of that solo if you asked them to

"Everyday I Have the Blues", the B.B. King tune written by Peter Chapman, burns through the start of side four, with Toy displaying some of his hottest blues guitar licks ever etched into vinyl.  The side concludes with a rocking version of "Take the Highway", the long time concert opener, and perennial favorite.

With cover art by Jim Campbell, drawn from photos taken by George's brother, Chuck, Where We All Belong is nothing short of a classic rock and roll album.  Excellent production and superior playing make this the definitive MTB album.
by Michael B. Smith 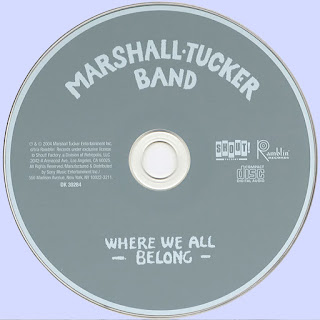 Free Text
Text Host
Posted by Marios at 4:14 AM 4 comments: