The Monocles And The Higher Elevation - The Spider The Fly And The Boogie Man (1965-69 us, fabulous garage beat surf folk psych, 2008 release) 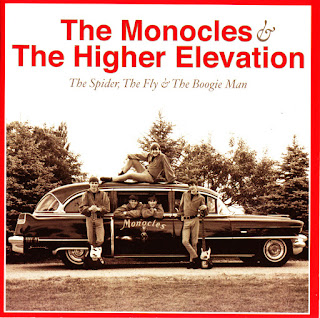 Hailing from Greeley, CO, the Monocles served as an unwitting example of the strange effect LSD had on America's youth during the mid- to late 1960s. Early on, the Monocles started out as a fairly ordinary pop-rock outfit, playing stuff like "Sound of the Surf," "Heartbreak Hill," and "Treat Me Nice" that would raise no eyebrows at a typical teen club gig or high school dance. Then in mid-1966 the Monocles began to change; they cut a tune called "Psychedelic (That's Where It's At)" that doesn't sound all that freaky until you get to the guitar solo, but it led to some truly bent sessions later on, most notably the twisted psychodramas of "The Spider and the Fly," "The Boogie Man," and "The Diamond Mine" (the theme song for Dave Diamond's Los Angeles radio show).

What happened to these guys? It's anyone's guess if they were ingesting the dreaded lysergic acid, but they certainly learned the benefits of sounding like you were gobbling the stuff by the fistful, and there are some prize moments of small-town psychedelia lurking on The Spider, the Fly and the Boogie Man, a collection of 31 rare and unreleased sides from the band. In the summer of 1967, the Monocles changed their name to the Higher Elevation, but while the new name may have sounded a bit more trippy, by this time the band had scored a deal with Liberty Records and their material developed a far greater degree of polish, with sharper playing and exacting harmonies, though there are some fine examples of psychedelic pop ("Odyssey" and "Crazy Bicycle") and sunshine pop ("Here Comes Sunshine" and "Summer Skies") featured here, as well as a solid cover of the Lovin' Spoonful's "Good Time Music" which supposedly features John Sebastian on tambourine and backing vocals.

Given that neither the Monocles or the Higher Elevation ever released an album, this is a surprisingly thorough summary of their career, including a well-detailed liner essay by Les Peterson (though someone needs to tell the folks at Fab Gear that small grey type on a black page doesn't make for easy reading), and is likely to remain the definitive anthology of their recorded work.
by Mark Deming 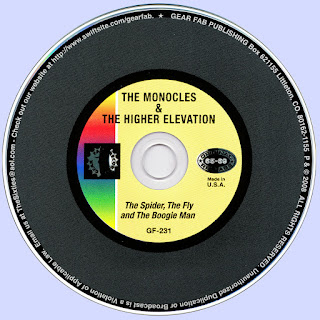 Free Text
Just Paste
Posted by Marios at 5:44 AM 3 comments: