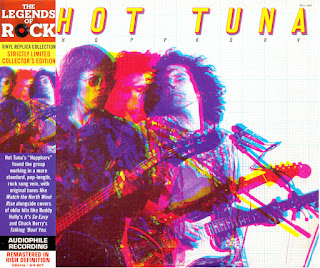 Begun as an acoustic spinoff of the Jefferson Airplane, Hot Tuna eventually became the full-time focus of founding members Jack Casady and Jorma Kaukonen, emerging as a popular touring act of the 1970s. The two were lifelong friends, growing up together in Washington, D.C., and playing in the group the Triumphs. After high school, guitarist Kaukonen and his government-service parents relocated to the Philippines, but he returned to the U.S. in time for the advent of psychedelia, landing in San Francisco and co-founding the Airplane in 1965. Bassist Casady joined not long after, and together they helped lead the group to massive success during the late '60s.

Hot Tuna -- originally dubbed Hot Shit, much to the chagrin of their label, RCA -- first began taking shape in 1969, while both Casady and Kaukonen were still active members of the Jefferson Airplane; in fact, their first performances were sandwiched between regular Airplane gigs. As a trio rounded out by harmonica player Will Scarlet (and occasionally including Airplane members Marty Balin and Spencer Dryden).

Unlike recent Hot Tuna albums, Hoppkorv found the group acting less as a mouthpiece for guitarist Jorma Kaukonen's compositions and more as a heavy rock cover band, handling such familiar material as Buddy Holly's "It's So Easy" and Chuck Berry's "Talkin' 'Bout You," although "Watch the North Wind Rise" was one of Kaukonen's better tunes. Even on the originals, the tempo had picked up, the arrangements were shorter; nothing here ran as long as five minutes, and the sound had been filled out by the occasional addition of keyboards, second guitar, and background vocals.
by Jason Ankeny and William Ruhlmann 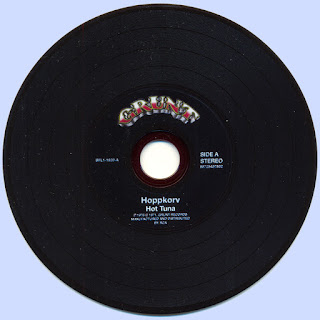 Free Text
Text Host
Posted by Marios at 10:20 AM 3 comments: