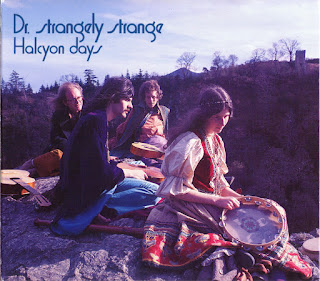 Dr Strangely Strange were a sort of Irish hippy folk band who strode the earth for a few years up to 1971. Best known for the inclusion of their track Strangely Strange But Oddly Normal (from their first album ''Kip Of The Serenes') on the Island records sampler 'Nice EnoughTo Eat'.

They were usually compared to The Incredible String Band, which was fair comment, though DSS were often a lot more fun. They started off acoustically but by the time of their second album, 'Heavy Petting' they had embraced electric instruments on some tracks, even eventually adding a drummer.

The original plan for 'Halcyon Days' was to issue the tracks they recorded for the BBC, but this fell through. Adrian Whittaker, whose baby this project very much is, was amazed to find instead, that there were nearly enough unissued, and in some cases previously unknown, tracks to fill an album, with the band (who still exist when they feel like getting together) adding three new songs recorded last year in their original style.

And this is what we have here. The delightful Going To Phoulapouca is highly representitive of their early sound, as is HMS Avenger, the tale of a 19th Century shipwreck narrated with humour and weirdness.

Their later, rockier, sound shows up in Sweet Red Rape and Horse Of A Different Hue, then latter featuring a Santana-style intro inspired by the time DSS supported them (!). The three new songs fit perfectly too, especialy The Invisible Kid, with it's clever lyrics. Adrian's sleevenotes give a full history of the band, and a guide to the many strange characters who populate their songs.

Anyone who liked them first time round will love this album, and hopefully a whole new generation of fans will discover it and work backwards.
by Grahame Hood 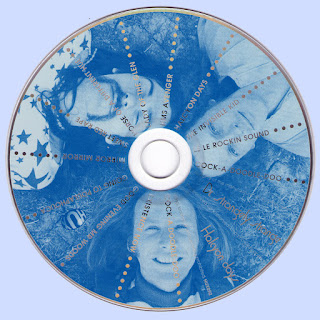