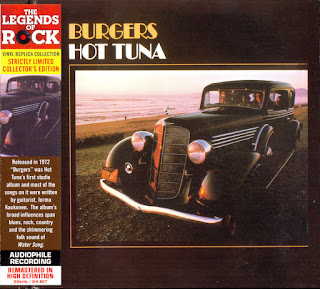 Hot Tuna leads the splinter league in longevity. This is their third album, giving them a greater output–in a comparable time period–than the parent Jefferson Airplane. There is undeniable talent in the band: Jorma Kaukonen is one of the most readily identifiable electric guitar stylists, and Jack Casady (whose headband was tattooed onto his forehead during a visit to San Diego in 1968) always gets a mention when you're discussing the finest bassists. Papa John Creach's credentials (which include an excellent solo album) are beyond reproach, and drummer Sammy Piazza's capabilities run about even with the demands made of him.

Burgers is easily their best effort–a generally enjoyable marriage of the first album's acoustic blues with the electricity of the second. It's really Kaukonen's show–his guitars dominate and he hoards all the lead vocals–and things seem to work best when he realizes it and defines some room for the others to move, as on "Ode To Billy Dean." His vocals add very little, and so the numbers where their spaces are filled by Papa John's violin (the instrumentals "Water Song" and "Sunny Day Strut") also work to advantage. Interaction would seem to be the key.

Even the weaker cuts, however, are buoyed somewhat by an inescapable gusto. Reacting, perhaps, to the somber self-importance which so mars the Airplane, Hot Tuna is mostly about blowing off some steam and having a good time. They indulge in a lot of traditionally-oriented material, but with enough energy and good intent to pacify those of us who cringe at first sight of musical scholars with their texts on Blind Lemon Jefferson and holy deadpan delivery.

Yet this same gusto contributes heavily to the album's areas of failure. On stage, a certain amount of untogetherness will be compensated for by energy or visual impact; in the studio, the consequences can be drastic. At times the album can seem irritatingly slapdash, and the sound quality has occasional lapses such that you'd swear the instruments were played through instant mashed potatoes. The studio environment requires a little more care and a lot more diligence than it is given here.

So while Burgers has its indisputable moments, the basic question of energy distribution keeps popping up. That Kaukonen and Casady don't apply the energy expended on Hot Tuna toward the task of breathing some life into the Airplane (who, in my opinion, haven't given us anything of sustained substance since Crown of Creation) must prompt reservations which put a damper on whatever measure of success is achieved here. Or, at this point, maybe the Airplane is the splinter group....
by Ben Edmonds 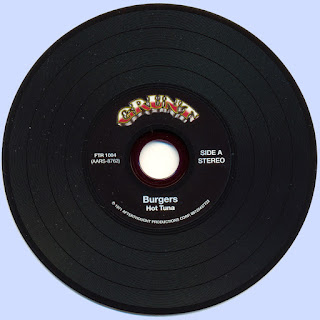