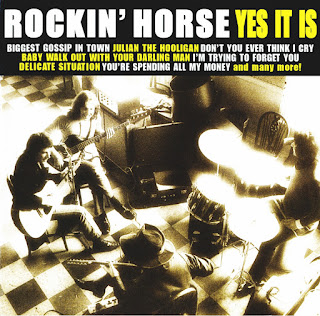 Jimmy Campbell was perhaps the most talented “unknown” musician to come out of the early 60s Liverpool scene.  One of his earliest bands, the Kirkbys, played Beatles’ influenced beat music and folkrock, releasing a few respectable singles in the mid 60s.  When psychedelia became the trend, Campbell put together the 23rd Turnoff, who released just one single, the excellent “Michaelangelo.”  In the middle of Campbell’s solo career (he released 3 albums) he took some time off and with the help of ex-Merseybeat Billy Kinsley put together Rockin’ Horse.  Most of the tracks on Yes It Is were written by Campbell with Kinsley contributing just 3 tunes.

Yes It is, released in 1970, is a mixture of power pop and Band influenced rural rock.  The Band influenced ditties are the weakest numbers (there’s just three) on the album with the notable exception of a very good rural track titled “Son, Son.”  The remainder of Yes It Is is first class power pop and probably the most powerful music of Campbell’s career.  Tracks such as “Biggest Gossip In Town” and “Oh Carol, I’m So Sad” hark back to Campbell’s early British Invasion roots.   These two gems characterize a unique album that has a  ragged, ramshackle feel – very intriguing.  Others songs like “Delicate Situation”, “Don’t You Ever Think I Cry”, “I’m Trying To Forget You” and the title track recall late period Beatles – think Abbey Road or Let It Be.

So with the exception of two duds, this is an excellent set of early 70s rock n roll by one of rock’s forgotten (albeit eccentric) talents.  Other notables:  the whimsical but tuneful “You’re Spending All My Money” and the rocking “Stayed Out Late Last Night.”  Rev-Ola reissued Yes It Is in 2004 with plenty of worthy extras.
by Jason Nardelli 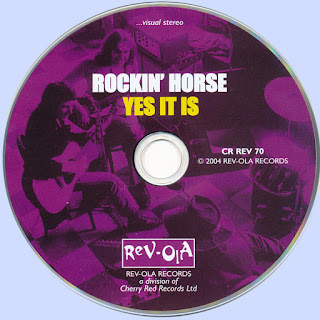 Free Text
Text Host
Posted by Marios at 10:55 AM 4 comments: