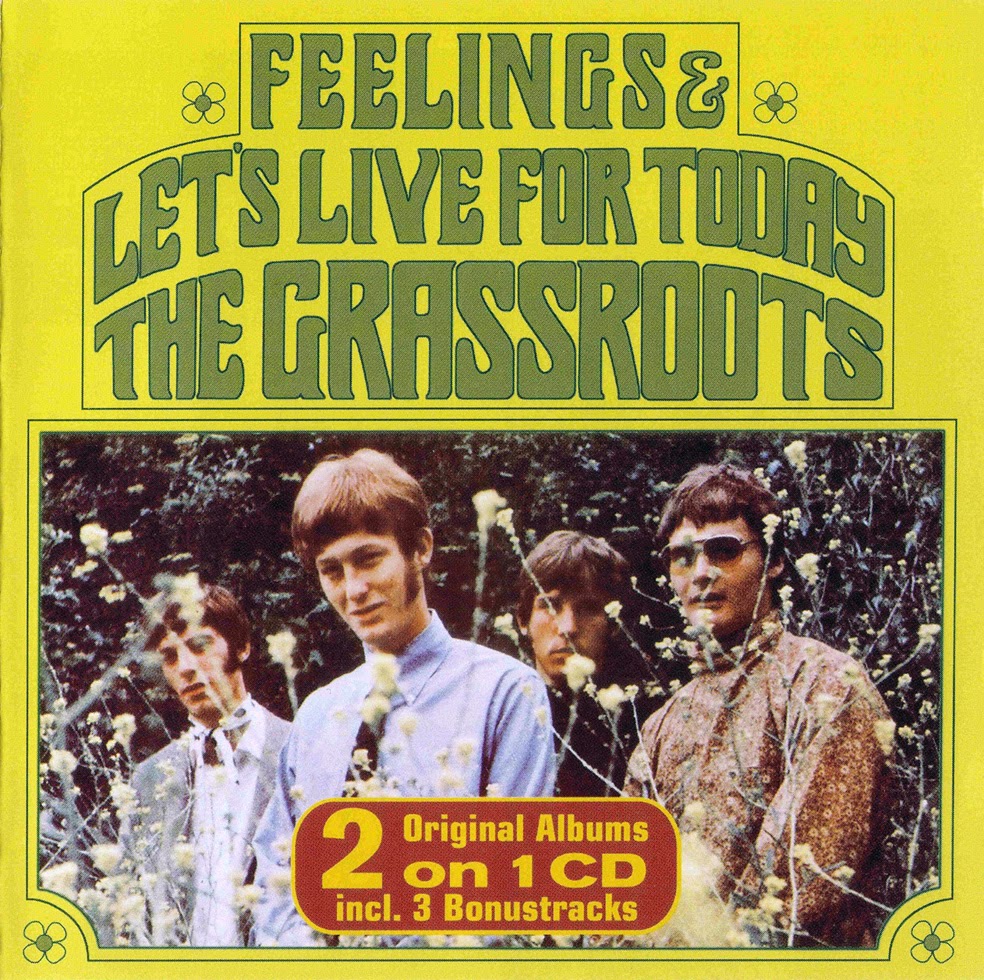 Released in the spring of 1967, Let's Live for Today was almost a musical throwback, steeped in folk-rock, which was fairly passé at the time, rather than psychedelia, but that's what makes it so appealing to listeners today. Listeners in 1967 were probably disappointed that there was nothing on the album as dramatic or memorable as the title track, but everything else is solid folk-rock with a pretty hard edge, which allows it to stand quite well alongside rival releases by the Beau Brummels, the Cryan Shames, the Blue Things, et al.

Most of the music here is derived from the P.F. Sloan/Steve Barri songwriting and production team, spiced with four surprisingly strong originals -- mostly drawn from the original demo tape that they submitted as the 13th Floor -- by the band members themselves. The Sloan-Barri numbers are smooth, hook-laden folk-rock "Things I Should Have Said," "Is It Any Wonder," some of it with a garage band edge, and with elements of mild pop psychedelia ("Wake Up, Wake Up") occasionally manifesting themselves.

Sloan and Barri's production gave the music a polish that made it thoroughly commercial without entirely losing sight of the band's fervor; the Grass Roots, only a few months out of playing bowling alleys, rose to the occasion in the singing and the basic playing, but they were also in the hands of two producers who knew how to add such embellishments as an unobtrusive harpsichord or flute over a garage band workout like "Tip of My Tongue," and who also took full advantage of stereo separation.

The latter made this album a real treat for the fans, who bought it and got to hear the playing by Sloan (who contributed some guitar), Creed Bratton, and Warren Entner, and the singing by all of them (especially on "Is It Any Wonder") in vivid detail. Also surprising are the group originals, such as Entner and Bratton's "Beatin' Round the Bush" and Bratton's rocking "House of Stone," each of which is a match musically for most of the Sloan-Barri numbers. Admittedly, the lyrics on Sloan and Barri's songs are somewhat more sophisticated than those on most of the group originals, but the simpler words on the latter firm up this album's rock & roll credentials. The CD reissue has decent sound and is worth tracking down as one of the last examples of 1960s commercial folk-rock.

In their next album "Feelings" changed their name to "Grassroots" (and then changed it back two albums later) -- was a serious departure from its predecessor. Having reached the Top 10 with "Let's Live for Today" and made the Top 100 with the accompanying album -- all done under the direction of producers Steve Barri and P.F. Sloan, with a lot of outside musicians playing on them -- the group members were eager to flex their own musical muscles. The result was Feelings, a much less slick, less polished work but one that better reflected the quartet's own sensibilities.

This album was to the Grass Roots roughly what Headquarters was to the Monkees, though not remotely as popular. The album opens with the title track, a group original going back two years, to their days as a garage band -- the sound is psychedelia with a garage band edge, complete with fuzz effects and a spaced-out feel, complete with a faux-raga break. A trio of Barri/Sloan and P.F. Sloan numbers follow, all produced in a more lyrical folk-rock/pop mode that recalls the prior album -- indeed, "Here's Where You Belong" closely resembles "Where Were You When I Needed You" in tempo and texture. "The Sins of the Family Fall on the Daughter" is a surprisingly catchy number for so serious a subject (and title), with pleasant hooks and a searing lead guitar part of the sort that AM radio listeners seldom associated with this band; and "Melody for You" is a pleasant piece of midtempo Baroque pop/rock.

The members' own compositions dominate most of the rest of the record, and the sound varies widely -- the Warren Entner/Rob Grill-authored "Who Will You Be Tomorrow" offers a deliberately heavier sound without any attempt at emulating the pretty pop harmonies that dress up the Barri/Sloan numbers -- but on "You Might as Well Go My Way" (written by Richard Podolor) and "All Good Things Come to an End" (authored by Albert Hammond), the group delivers a leaner, punchier version of their folk-rock sound.

Creed Bratton's bluesy "Hot Bright Lights" gives the lead guitarist a chance to show off his work with the volume pedal; they switch gears to languid psychedelic pop on Entner and Grill's "Hey Friend," while the same writing duo's "You and Love Are the Same" gives Entner a great part on rhythm guitar and all four a chance to contribute some lush choruses amid a psychedelic haze that is enhanced by the presence of a string orchestra accompaniment. And "Dinner for Eight" is an eerily reflective piece with a disconnected psychedelic break that rolls right back into a reprise of "Feelings." Without a hit single to drive its sales, Feelings was ignored by most listeners and never charted, which is a shame.
by Bruce Eder 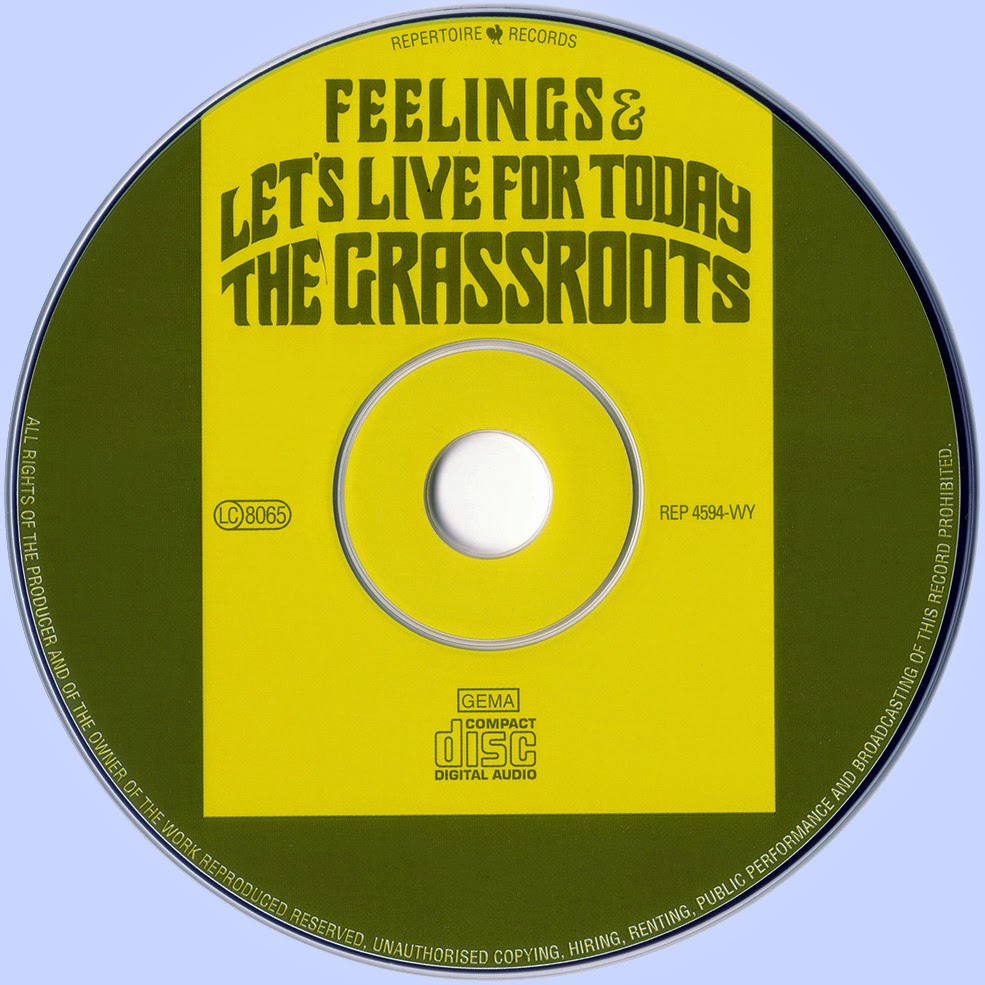